Threats to doctors and lawyers who aided protesters in Zimbabwe condemned

Zimbabwe’s president says search has begun for lawyers, doctors and nurses who assisted civilians during protests over the economy 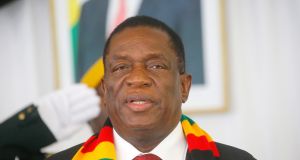 Zimbabwean president Emmerson Mnangagwa. He confirmed he had issued the order for the army to tackle the protesters. Photograph: Aaron Ufumeli/EPA

Threats by Zimbabwe’s president to “deal with” legal and medical practitioners who aided hundreds of protesters jailed and injured recently following clashes with security forces have been condemned by human rights defenders.

Addressing a youth rally of the ruling Zanu-PF party on Saturday, Emmerson Mnangagwa said his government had begun to search for lawyers, doctors and nurses who assisted civilians caught up in a crackdown in January on violent protests over the economy.

He said that by informing the “rioters” before the protests began on January 15th that they would be available to them, legal and medical professionals were partially responsible for the violence as their presence had buoyed the demonstrators.

Dewa Mavhinga, Human Rights Watch’s southern Africa director, said Mr Mnangagwa’s threats were “misplaced, unfortunate and showed clearly that the Zimbabwe government has no genuine commitment to the rule of law or respect for human rights”.

“The so-called New Dispensation in Zimbabwe has quickly turned out to have been a hoax; the true colours of the regime are now on display for all to see. President Mnangagwa needs to urgently ensure justice and accountability; these are the key pillars that will lead to genuine international re-engagement,” he told The Irish Times in an email.

Mr Mnangagwa, who succeeded Robert Mugabe as president after the former dictator was toppled by the military in 2017, also confirmed for the first time he had issued the order for the army to tackle the protesters.

Last month’s union-led protests were sparked by Mr Mnangagwa’s inability to turn around Zimbabwe’s crippled economy since his victory in a disputed general election in August.

Local rights groups have claimed that 17 people were killed by security forces during the clashes, and dozens more seriously injured.

The Zimbabwe Republic Police has confirmed that 1,100 civilians were arrested during the violence and a clean-up operation the security forces conducted in the days that followed it.

Hundreds of these people have been represented in court by the Zimbabwe Lawyers for Human Rights organisation.

During Saturday’s rally in Mwenezi, Masvingo province, Mr Mnangagwa claimed that the opposition Movement for Democratic Change (MDC) Alliance and non-governmental organisations were preparing for another round of protests. He said the government would be ready for them this time.

The Zimbabwe Association of Doctors for Human Rights responded to the threats against its members by saying it would not be deterred as doctors had an ethical obligation to assist people in need of medical assistance no matter who they are.

“As doctors our ethical obligation is to treat anyone who needs medical services,” the association said in a statement.

The MDC has claimed the crackdown in January was designed to decimate its party membership.