Shamima Begum (19), who wants to return to Britain, did not want to be Isis poster girl 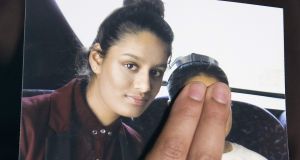 The east London schoolgirl who left the UK to join Islamic State, also known as Isis, has compared the Manchester Arena bombing to air strikes by the western allies that killed non-combatants in Isis-held areas.

Shamima Begum (19) says she wants to return to Britain and is asking for “forgiveness”, having given birth to a baby son on Saturday while in a refugee camp in Syria.

A debate has broken out about whether Ms Begum, who travelled to Syria in 2015 aged 15, should be allowed to return to Britain having joined Isis, which has claimed responsibility for terrorist attacks on the UK.

The Manchester Arena attack in May 2017 killed 22 people after a suicide bomber detonated a device packed with shrapnel at the end of a pop concert.

In the latest of a series of interviews she has given while in the camp, Ms Begum told the BBC she had regrets about the Manchester attack: “I do feel that is wrong. Innocent people did get killed,” she said.

“That was unfair on them … They weren’t fighting anyone. They weren’t causing any harm. But neither was I and neither [were the] other women who are being killed right now back in Baghuz.”

Amid the debate about whether she should be allowed to return to Britain, it has been asked whether legally she can be stripped of her British citizenship.

Ms Begum took full responsibility for her decision to leave Britain, saying she alone was “the one who made the choice”. She added: “Even though I was only 15 years old, I could make my own decisions. But I will admit, it’s my fault right now. I just want forgiveness from the UK. Everything I’ve been through, I didn’t expect I would go through that.”

She said while in Britain she had been lured by Isis propaganda videos about the “good life they can provide”. She had also viewed beheading videos and those glorifying Isis fighters.

The father of her newborn son is an Islamic State fighter and despite her four years with the sworn enemies of the UK, Ms Begum said: “I actually do support some British values.”

Ms Begum also said in the latest interview that if she made it back to Britain and was charged and convicted, she wanted her family to look after her son. Her discovery in a camp last week has highlighted the issue of what western countries should do about their citizens who are now fleeing areas formerly controlled by Isis that been retaken by its enemies.

Downing Street has rejected president Donald Trump’s call for Britain to take back extremists who have fought with Islamic State. – Guardian