Russia’s constitutional changes to come into force on July 4th 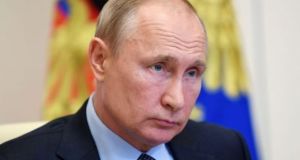 The Kremlin hailed the vote as a triumph, while critics decried it as illegal and illegitimate.

Changes to the Russian constitution, including an amendment that could pave the way for president Vladimir Putin to rule the country until 2036, will come into force on July 4th, the Kremlin said on Friday.

The electorate overwhelmingly supported the changes, which were approved after a nationwide week of voting that came to an end on Wednesday, with almost 78 per cent of people casting their ballot in favour.

The Kremlin hailed the vote as a triumph, while critics decried it as illegal and illegitimate. An independent monitoring group said the vote was deeply flawed.

Other key reforms include an amendment granting former Russian presidents automatic immunity from criminal prosecution, as well as reforms enshrining a reference to “belief in God” and a statement about marriage being only the union of a man and a woman. – Reuters