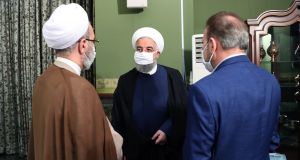 Iranians who do not wear masks will be denied state services and workplaces that fail to comply with health protocols will be shut for a week, Iranian president Hassan Rouhani said on Saturday as he launched new measures to try to curb the coronavirus.

Iran has been battling the spread of the coronavirus, with the total number of cases hitting 237,878 on Saturday and a further 148 deaths bringing the country’s toll to 11,408, Health Ministry spokeswoman Sima Sadat Lari said on state television.

It comes as the number of cases worldwide have passed 11.2 million, according to Johns Hopkins University.

Wearing masks becomes mandatory from Sunday in covered public places, Mr Rouhani said on state television after tougher curbs were imposed in cities and towns in five provinces where the outbreak is rising after an easing of lockdowns from mid-April.

And a government website published photos of Rouhani, who is rarely seen wearing a mask, with a face covering.

Those infected have a “religious duty” to notify others, Rouhani said, adding: “Keeping your infection a secret violates the rights of other people”.

The rising toll of Covid-19 deaths is overwhelming the Bolivian city of Cochabamba, where desperate relatives of one apparent victim of the pandemic left his coffin in the street for several hours to protest against difficulties in getting him buried.

Neighbour Remberto Arnez said the 62-year-old man had died on Sunday and his body had been in his home ever since, “but that’s risky because of the possible contagion”.

After a few hours, funeral workers turned up and took the coffin to a cemetery.

Police Colonel Ivan Rojas told a news conference that the city is collecting “about 17 bodies a day.

“This is collapsing the police personnel and funeral workers” in the city of some 630,000 people.

“The crematorium oven is small, that that is where the bodies are collecting,” said national Labour Minister Oscar Mercado, who told reporters that officials were preparing 250 new burial plots in the city’s main cemetery.

Florida has reported a record number of coronavirus cases in the latest sign that the virus is surging in many parts of the United States, casting a pall over Fourth of July celebrations.

Officials and health authorities warned people to take precautions or simply stay home on Independence Day, as confirmed cases are climbing in 40 states.

The US set another daily record on Friday with 52,300 newly reported infections, according to the tally kept by Johns Hopkins University that is widely thought to be an undercount.

Florida reported 11,445 confirmed infections on Saturday, bringing the statewide total to more than 190,000.

Alabama this week also set a record for infections reported in a day, with more than 1,700 new confirmed cases recorded on Thursday, and state health officials worried that the holiday weekend could lead to the type of spike that followed Memorial Day weekend.

The sobering updates came as local officials and health experts across the country tried to minimise opportunities for the virus to continue spreading on a holiday weekend typically spent swimming, eating at garden gatherings or crowding elbow-to-elbow to view parades and fireworks shows.

Many communities cancelled those events and cautioned people against gathering on their own.

In Florida, bars statewide are shut down and some regional attractions, such as Zoo Miami and Jungle Island, have closed.

Officials in south Florida — including in Miami-Dade County and the Florida Keys — closed beaches through the weekend.

In Britain on Saturday, some signs of normalcy returned with pubs and barbers reopening for the first time in months.

But other countries continued to report record highs in new confirmed cases, including South Africa and India.

In Australia and north-east Spain, authorities ordered lockdowns for specific counties or communities aimed at stomping out increases in cases. – AP/Reuters