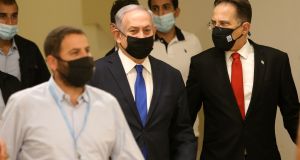 Sudan is to take steps to normalise ties with Israel, it was announced on Friday, in a move that and Palestinians described as a “new stab in the back”.

Reacting to the news that Sudan was to become the fifth Arab state to normalise relations with his country, Israeli prime minister Binyamin Netanyahu hailed it as a “new era”, saying: “This is a new era. An era of true peace. A peace that is expanding with other Arab countries – three of them in recent weeks.”

In a video statement he said: “In Khartoum, the capital of Sudan, the three principles of the Arab League were adopted in 1967: no peace with Israel, no recognition of Israel, and no negotiations with Israel,” he said.

“Whereas today Khartoum says: yes to peace with Israel, yes to recognition of Israel and to normalisation with Israel.”

Mr Netanyahu thanked US president Donald Trump and his team for their role in brokering the deal, and said Israeli and Sudanese delegations would soon meet to discuss co-operation in areas “including agriculture, trade and other areas important to our citizens”.

But a senior Palestinian Liberation Organisation (PLO) official described the announcement as a “new stab in the back” for Palestinians.

“Sudan’s joining others who normalised ties with the state of the Israeli occupation represents a new stab in the back of the Palestinian people and a betrayal of the just Palestinian cause,” said Wasel Abu Youssef, a member of the PLO, speaking in Ramallah in the occupied West Bank.

In Gaza, Fawzi Barhoum, a spokesman of the Islamist group Hamas, a traditional ally of Sudan, told Reuters that Sudan’s move was a step in the “wrong direction”.

“Sudan joining other countries in normalising ties with the Israeli occupation will encourage the Zionist enemy to commit more crimes and more violations against the Palestinian people,” said Mr Barhoum. – Reuters