‘It was barbaric’: Nigeria reels from brutality of protest crackdown 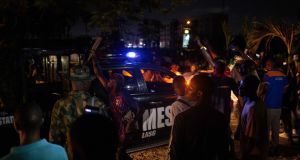 A patrol car of the Lagos state security drives through Nigerian protesters demonstrating in the streets of Alausa Ikeja after the authorities declared an open-ended lockdown in Lagos. Photograph: Benson Ibeabuchi/AFP via Getty

“Don’t run! Sit down!” yelled the young woman on the stage at the hundreds of impassioned protesters in front of her. “Hold your flag? . . . Nobody will attack us.”

But even as she was captured on video trying to calm the young Nigerians gathered at Lekki tollgate in Lagos for a protest against police brutality, gunfire was already crackling.

Soon, footage began to circulate online showing people fleeing and screaming as men in camouflage opened fire on the crowd. The violence in Africa’s biggest city on Tuesday night left at least 10 dead, according to Amnesty International, and the nation reeling.

“They didn’t take out a bullhorn . . . to say ‘we’re here to disperse the crowd’ – no . . . about seven of them walked [up] and standing 4ft apart they started firing shots,” said Akin Olaoye, a 38-year-old businessman, who helped organise food, water and security at the tollgate. “It was carnage.”

The nationwide protests in Africa’s biggest economy began this month after a video allegedly showing a Special Anti-Robbery Squad officer killing a man went viral under the #EndSARS hashtag. SARS has long been accused of gross human rights abuses, including murder, extortion and torture.

The biggest demonstrations since the return of civilian rule in 1999 – which participants say are spontaneous, with no specific leaders or organisers – have been largely peaceful. But on Tuesday they were met with a brutal crackdown.

Babajide Sanwo-Olu, the Lagos state governor, had earlier in the day imposed a lockdown on the city – ostensibly because of attacks on police stations but with many suspecting the aim was to shut down the rallies.

Ahead of the scheduled start of the curfew, hundreds gathered at the tollgate to continue their protest, with many singing the national anthem and waving the national flag as gunfire broke out.

“We decided we couldn’t leave because we are not here to run from the government – we are here demanding our rights,” said Famade Ayodeji (30), who works in logistics.

Many demonstrators said the assault seemed premeditated. They point out that street lights did not come on as usual amid the chaos on Tuesday night, while a large electronic billboard above the tollgate was switched off, leaving the scene in darkness later as, witnesses allege, soldiers removed bodies and bullet casings.

The government, led by President Muhammadu Buhari, has denied that anyone was killed in the crackdown or that the military was involved. But public mistrust runs deep.

“[The government] needs to understand this generation,” said Olaoye. “We’re tired of the very disgraceful approach they’ve taken to governance, where they think they can create all kinds of propaganda and tell all kinds of lies when confronted with evidence.”

Lagos has been in lockdown since the violence, but armed gangs have roamed the city, setting fire to the high court, police stations and the offices of a leading television station and looting and torching stores.

The scenes contrast with the peaceful movement of recent days. The demonstration at Lekki tollgate – the most prominent of the nationwide rallies – had been focused but festive. Protesters made speeches, led chants and shared stories of their brutalisation at the hands of the police from a makeshift stage.

DJs played sets. Vendors sold food and volunteers handed out water, while others organised legal aid and health services. Young Nigerians from all walks of life, from start-up founders and the scions of the country’s wealthy elite to minibus drivers and cooks, joined together to demand change.

“The Lekki protest was peaceful the whole time . . . [but] we have a country where the lives of the citizens don’t matter to anybody in power,” said Chike Okonkwo (28), who said he counted at least seven people who had been shot.

“It tells me that we are not safe in our country, that if I’m going to bring children into this country somebody one day might shoot them for just demanding their rights.”

Okonkwo and multiple other witnesses said the shooting was carried out by soldiers. The army has denied any involvement, although Sanwo-Olu also suggested the military was responsible and has urged Buhari, a former general who ran a military government in the 1980s, to investigate. No organisation has claimed responsibility for the attack.

International condemnation was swift, with Antonio Gutteres, the UN secretary-general, US presidential candidate Joe Biden and Amnesty International criticising the events. Buhari addressed the country for 10 minutes on Thursday night, though he did not mention the Lekki shootings, seemed to conflate protesters with looters and said his decision to dissolve SARS and enact police reforms had “been misconstrued as a sign of weakness”.

“This government respects and will continue to respect all the democratic rights and civil liberties of the people, but it will not allow anybody or groups to disrupt the peace of our nation,” he said, calling for an end to street protests.

“We need to [regroup and] structure ourselves . . . [and] one day things will change . . . They can kill us but they can’t kill us all.” – Copyright The Financial Times Limited 2020