Iran’s hardliners head for sweeping victory as voters stay away 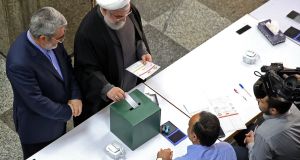 Early results show Iran’s hardliners are on track for a sweeping victory in the parliamentary election after many voters stayed away due to the absence of prominent reformist candidates and disillusionment over economic hardships.

The official voting numbers were not yet known, but unofficial estimates put the turnout at about 40 per cent – the lowest in any parliamentary election since the 1979 Islamic revolution.

Estimates in the bigger cities were as low as 20 per cent to 30 per cent, making them even more embarrassing for the Islamic republic as voters failed to engage.

In Tehran, the partial official results showed the hardliners had won all 30 seats with Muhammad Bagher Qalibaf, the former mayor, as the leading winner. Saeed Shariati, a reformist political activist, said in a post on Twitter that 78 per cent of eligible voters in the capital did not vote.

Low turnouts in other big cities such as Isfahan, Mashhad and Tabriz also looked set to help the hardliners to victory.

The Islamic republic has capitalised on traditionally high turnouts in national elections in the past to boast about its public legitimacy.

“Politicians always confiscated our turnout in their favour instead of resolving our problems,” said one taxi driver who did not vote. “We realised our votes make no change.”

“The new members of parliament are supported by a small minority of citizens,” said Hamid-Reza Jalaeipour, a university professor of sociology. “The main reason people did not vote is because they see it would have no impact on the country’s affairs.”

Economic hardships have also subdued the mood in Iran. Friday’s poll was the first since US president Donald Trump imposed tough sanctions on the country after withdrawing from the 2015 nuclear deal world powers signed with Tehran.

The rial, Iran’s currency, has fallen by about 60 per cent over the past two years and annual inflation is now at 37 per cent.

Washington’s “maximum-pressure” strategy has also weakened the position of Iran’s reformers, who gambled on the nuclear accord to speed up political, social and economic reforms.

However, it has emboldened anti-US hardliners, who turned voters’ despair to their advantage.

Hundreds of pro-reform candidates were barred from participating in the election by the country’s constitutional watchdog on the grounds that their allegiance to the Islamic republic’s principles could not be verified.

At many polling stations, only conservative Iranians voted while pro-reformers boycotted the election.

Analysts expect the hardliners to play down the low turnout as they prepare for next year’s presidential election, when centrist president Hassan Rouhani will step down after his second term finishes.

Mohammad Ghouchani, the editor of a reformist newspaper, said moderate forces possibly won a maximum of 50 seats in the 290-strong legislative body.

“We do not lose to hardliners,” he said. “We lose to the low turnout and the poor performance” by reformists in the outgoing parliament.– Copyright The Financial Times Limited 2020