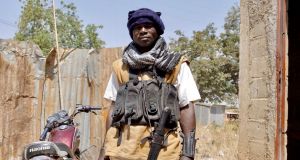 Outside his temporary lodgings in the city of Fada N’Gourma in eastern Burkina Faso, Timothé Mano proudly waves the blade that he alleges has ended the lives of dozens of militants. The 46-year-old is a commander in the VDP, a civilian volunteer force legalised in early 2020 to help Burkina Faso’s beleaguered army combat the growing threat posed by armed Islamists.

He is a self-declared hunter and is delighted to have traded hunting big game in the nearby Arli National Park for stalking jihadists on the outskirts of the city. “When I heard the government was asking for people to volunteer themselves and fight against those who are coming to attack us, I knew I had to join,” he says.

During the week Timothé shuttles back to his village, Tanwalbougou, about 45km east of Fada, where he, along with another, commands more than 100 boys and men. Over the past year they have fought the jihadists about 23 times. They have received no equipment from the government, despite promises, so have resorted to taking weapons from the battlefield. They claim none of their own has been killed.

Burkina Faso, once one of the most stable countries in west Africa, has fallen prey to the militant violence sweeping across the Sahel, a semi-arid region that stretches across north Africa.

Armed groups, many with links to Al-Qaeda and the Islamic State in the Greater Sahel, have pushed the Burkinabe government from large swathes of the north and east, displaced more than one million people and killed thousands. Burkina Faso is trying to stop the spread of violence before it reaches the Gulf of Guinea. To help do that, the government has given men with minimal training the authority to take the law into their own hands.

Timothé is Gourmanché and feels deep resentment towards the Fulani, another ethnic minority in the country. The Fulani, who are traditionally semi-nomadic herders, are Muslim like the majority of Burkinabe – citizens of Burkina Faso – and have long been sidelined by society.

These tensions have been exploited by the jihadists, who use them to recruit Fulani to their ranks. This, in turn, has led to the Fulani community being targeted by the security services and volunteer militia, such as the VDP, who suspect them all of terrorist activity.

“Today when somebody says Fulani it means enemy,” says Timothé, “they are very dangerous. Back home [in Tanwalbougou], a single Fulani cannot cross the road.” Later, he issues a dark threat: “Unless the government helps to stabilise all the Fulani, what we need to do is kill all of them.”

To corroborate Timothé’s stories, and his rank in the VDP, The Irish Times travelled to Tanwalbougou.

The road to the village is decorated with wide, deep potholes. It’s quiet. The villages on the roadside are deserted. Until recently this area was crawling with militants who had links to the Islamic State terror group. On the outskirts of Tanwalbougou is an elegant mosque. In the centre of the village marketeers sell their wares and a few schoolchildren walk home from class. The local gendarmerie comprise men in their 20s wielding AK-47s.

This is the site of alleged extrajudicial executions of 12 Fulani men in May 2020, who were taken into custody after a counterterrorism operation in the neighbouring village of Pentchangou. Timothé heard about the men, but says he was sick on the day of the operation and knows nothing about it.

Despite an investigation into the deaths being announced, the government has shown little desire to follow through and draw conclusions. Before questions about May 11th can be put to the gendarmes, the national head of the VDP tells Timothé to revoke permission for The Irish Times’s visit to Tanwalbougou.

Before the G5 Sahel summit in N’Djamena in February, Human Rights Watch reported more than 600 unlawful killings by the security forces of Burkina Faso, Mali, and Niger during counterterrorism operations since late 2019.

Their guerrilla war against the militants, and subsequent role in negotiations, has brought a resemblance of peace to the village

Over the past few months however, the number of extrajudicial killings reported in Burkina Faso has reduced. “Since August 2020 the allegations have decreased,” says Corinne Dufka, Sahel director for Human Rights Watch, “but we’re also concerned that there’s been little to no apparent effort to investigate the myriad violations, including massacres, by all sides, including the state security forces, and we believe the lack of investigations and accountability could contribute to a resurgence of indiscipline and abuse.”

Across Burkina Faso it’s widely acknowledged that negotiations between the authorities and some militants have started, and this has contributed to the much-improved security situation.

“There are two reasons to explain the decrease in the number of attacks,” Mahamadou Sawadogo, a respected Burkinabe conflict researcher, tells The Irish Times. “The first: the success of Barkhane [France’s military intervention] and its allies, putting pressure on the various armed groups along the three-border area. The second: the beginning of negotiations between the government and the armed groups.”

In early February, prime minister Christophe Dabiré raised the option of negotiations during a speech in parliament and, in private, western diplomats are aware that dialogues have started. According to Timothé, negotiations began in Fada in October.

In Tanwalbougou, the VDP’s presence and close relationship with the gendarmes is evident. Their guerrilla war against the militants, and subsequent role in negotiations, has brought a resemblance of peace to the village but questions about human rights abuses linger.

They are confident in their mission and authority, but there is no plan for how to disband them when they are no longer needed. On the drive out of Tanwalbougou, armed boys line up alongside the car – one has a picture of socialist revolutionary Thomas Sankara glued to the butt of his weapon. They are not going anywhere soon.