Nigel Farage steps down as leader of Reform UK party

Brexit ‘has cut off Northern Ireland from the rest of the UK’, says politician 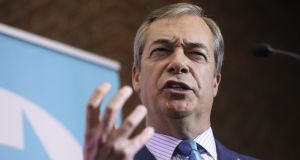 Nigel Farage said he now felt he could do as much to shift public opinion through media and social media as he could as a campaigning party leader. File photographer: Simon Dawson/Bloomberg

Brexit campaigner Nigel Farage said on Saturday he would step down as the leader of Reform UK, the rebranded Brexit Party he launched two years ago to campaign for what was commonly known as “no-deal Brexit”.

Mr Farage, who as leader of the eurosceptic UK Independence Party (UKIP) applied pressure on the government to hold the 2016 EU referendum, said the Brexit Party had helped the Conservatives “come to their senses” and chose UK prime minister Boris Johnson as their leader with a pro-Brexit agenda.

“The final outcome [of Brexit] has cut off Northern Ireland from the rest of the UK and treated our fisherman terribly, but we are out and there is no going back,” he said in a statement.

“Already, in terms of the vaccine rollout and trade deals around the world, we are seeing the benefits of Brexit and the EU itself turn into a laughing stock.”

Mr Farage said he now felt he could do as much to shift public opinion through media and social media as he could as a campaigning party leader.

He will be replaced as Reform UK leader by Richard Tice. – Reuters