Migrant desperation caused by conditions, disease and trauma of trying to cross Mediterranean 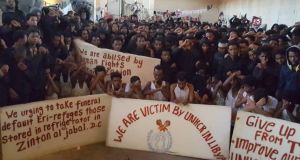 Detained migrants protest at Zintan detention centre in May 2019. Detainees were seeking for better conditions and wanted action to prevent further deaths.

More than 80 per cent of refugees and migrants locked up in one Libyan detention centre may have tuberculosis due to overcrowding and poor conditions, while at least 22 have died, according to an internal United Nations report.

The report, leaked to The Irish Times, said staff from the International Medical Corps, a US-based organisation which had been charged with providing medical care in Zintan detention centre, told UN officials they were only recently referring tuberculosis patients to hospital.

Some critically ill detainees from Zintan – 180km southwest of Tripoli – had been transferred to another detention centre in Gharyan, 100km northwest and on the front lines of fighting, “where most of them die”, the report said.

It said the bodies of Christians who died in Zintan were not being buried, partly because the local community insists the cemetery is only for Muslims.

The report was produced after an inter-agency UN visit to Zintan on June 3rd. Though 96 refugees and migrants were moved from the centre after the visit, more than 650 people remain there.

It said there was a high level of desperation, caused by some detainees having been in detention for two years, along with “poor conditions, diseases, (a) lack of solutions and not least the traumatisation caused by their experiences from attempts to cross the Mediterranean Sea and [being returned] to Libya”.

There are roughly 6,000 people currently locked up indefinitely in detention centres run by the Libyan Department for Combatting Illegal Migration (DCIM). Many of those were imprisoned after trying to reach Europe by crossing the Mediterranean Sea.

The EU has been training and providing equipment to the Libyan coast guard since early 2017 in a bid to stop migration to Europe. Tens of thousands of men, women and children travelled on boats that were intercepted, and were then returned to detention.

Speaking under condition of anonymity, an aid official with knowledge of the situation in Zintan said there had been “huge negligence”.

“That is why people are being punished . . . The UN leadership is weak in Libya, to the extent they can’t speak with [the Tripoli-based] government of national accord-run DCIM and ministry of interior and face them with arguments regarding migrants and their rights.”

The 22 people died between last September and May, and included a Gambian father and son, as well as a 16-year-old girl, according to current detainees.

Despite a spokesman for the Office of the UN High Commissioner for Human Rights, Rupert Colville, saying he was “deeply concerned” about the conditions in Zintan following the June 3rd visit, refugees and migrants in Zintan say little has changed.

Using a phone he has kept hidden because keeping them is prohibited, an Eritrean man told The Irish Times that detainees are currently getting one small dish of plain macaroni to share between two people each day, and nothing else.

The man, who is in his early 20s, said some people had now been given medicine by Médecins Sans Frontières staff, but taking it made them feel faint because of the lack of food. He said detainees had recently been crammed into smaller rooms, but overcrowding is so bad that some are being made to sleep outside under blankets.

“We are suffering psychologically, mentally,” he said. “We are urging to evacuate and resettle us out of Zintan.”