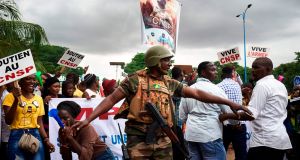 A soldier stands next to supporters of the CNSP celebrating during a gathering at the start of two days of talks aimed at validating the terms of reference for a transitional government in Mali. Photograph: Michele Cattani/AFP via Getty

Mali’s new military rulers have been given a deadline of September 15th to appoint a civilian president who can lead a transition period, following last month’s coup.

The 15-country regional bloc, the Economic Community of West African States (ECOWAS), has also called for elections to be held within 12 months. ECOWAS has already imposed sanctions on Mali, banning trade and shutting borders.

A coup was carried out on August 18th by military officers calling themselves the National Committee for the Salvation of the People (CNSP). The soldiers now in charge, who are being led by Assimi Goita, a colonel in the Malian special forces, said they planned to reinstate civilian rule within a “reasonable” time frame.

Ibrahim Boubacar Keita, a 75-year-old who had been president since 2013, was arrested and forced to resign. He has since travelled to the United Arab Emirates, ostensibly for medical treatment.

Tens of thousands of civilians protested in the streets in the months before the August coup, angry about corruption and national insecurity. The last parliamentary election took place in April, but the results were widely disputed, and a constitutional court ruling that gave more seats to Mr Keita’s party triggered unrest.

Protests were met with violence: over just three days in capital city Bamako in July, more than 300 people were injured and 14 killed, according to Human Rights Watch.

Mali, a francophone west African country of roughly 20 million people, has been mired in conflict since Tuareg rebels launched an offensive in the country’s north in early 2012, taking advantage of an abundance of weapons newly available because of the revolution in neighbouring Libya. Two months later, soldiers unhappy with the elected government’s response to the rebellion overthrew them in another coup.

A peace deal, agreed in 2015, failed to include many of the armed groups that had begun fighting in the years after the initial insurgency began, and conflict and instability has continued across the country. Armed groups linked to Islamic State and al-Qaeda are among others now competing for territory and influence.

In April 2019 the country’s prime minister and entire government resigned amid an increase in violence.

According to the International Crisis Group, there have been nearly 2,000 deaths related to conflict this year alone, and there has been a fivefold increase in attacks since 2016. About 1.7 million people have had to leave their homes.

A report released on Tuesday by the Global Coalition to Protect Education from Attack found there were growing numbers of attacks targeting schools. Last year there were more than 60, while more than 1,100 schools were closed completely. In June alone there were at least 27 attacks on middle schools, after they reopened to allow children to take exams.