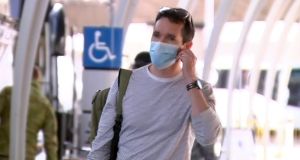 The last two China-based journalists for Australian news organisations have fled the country after a five-day diplomatic stand-off, amid fears they would be detained on national security grounds.

Their evacuation marks a new low point in Australia-China relations, which have soured considerably since Canberra’s call for an international investigation into the source of the coronavirus pandemic.

Michael Smith, from the Australian Financial Review, and Bill Birtles, with the Australian Broadcasting Corporation (ABC), were rushed out of the country after uniformed state security officers made unannounced visits to each of their homes last week, claiming they were “persons of interest” in a national security case.

With tensions between the two nations mounting, Australian diplomats had reportedly advised Birtles to leave the country early last week and he was due to fly out last Thursday.

He was hosting a farewell gathering in his apartment the day before his planned departure when seven state security officials arrived at his door just after midnight, announcing he had been barred from leaving China and demanding he submit to questioning about detained Australian citizen Cheng Lei, a high-profile news anchor for China’s state-run television.

Cheng was detained in August – reportedly for “endangering national security” – and is being held under “residential surveillance at a designated location”, a form of detention where she can be held for up to six months in custody without access to a lawyer or permitted family visits. Both Birtles and Smith have reported on Cheng’s case.

Following the police visit to his home, Birtles contacted Australian diplomatic staff who escorted him to their embassy in Beijing, where he spent the next four days.

Based in Shanghai, Smith took diplomatic shelter in the Australian consulate after he too received a late-night visit from seven police officers and was also informed he was not permitted to leave China.

Following a tense diplomatic stand-off, Beijing officials agreed to let the pair leave the country after submitting to an interview with police about Cheng, conducted in the presence of Australian diplomats.

They were finally allowed to fly out of China on Monday night and arrived in Sydney on Tuesday.

Speaking to media on his arrival in Sydney airport, Birtles said it was “very disappointing to have had to leave China under those circumstances” after living there for a number of years, but added “it’s a relief to be back in a country with genuine rule of law.”

He told the ABC that neither he nor Smith knew Cheng Lei well, and the police interviews concerning her “felt like a diplomatic tussle in a broader Australian-China relationship”, more than anything specific related to the case.

Their evacuation means no Australian news outlet now has a China correspondent, for the first time since the 1970s.

Ties between Beijing and Canberra have been increasingly strained in recent years, particularly since Australia took measures to protect against what it called China’s concerted influence-peddling efforts and growing political interference in the country.

China was then further angered earlier this year when Australia led the international calls for a thorough investigation into the origins and early handling of the coronavirus outbreak, which first emerged in the central Chinese city of Wuhan.

Beijing has since encouraged Chinese tourists and students to shun Australia, and has imposed trade restrictions on some of its key exports.

Australia upgraded its travel advisory to China in July, warning its citizens they could face arbitrary detention if they visited the country.