Magashule on a mission to win votes for ANC

Can political grandstanding and free T-shirts make up for the corruption scandals? 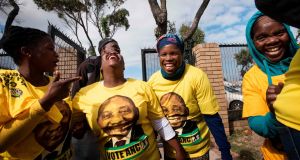 Supporters of the ruling African National Congress (ANC) in Cape Town, ahead of the general elections. Photograph: Rodger Bosch / AFP 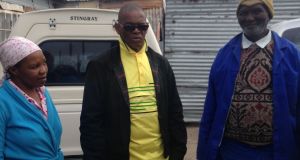 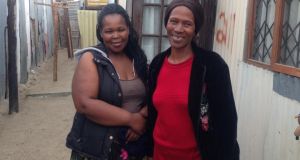 Clad in an African National Congress (ANC)-branded T-shirt fully buttoned up to protect against the cold, Ace Magashule, the secretary general of South Africa’s ruling party, walks purposefully around Nkanini looking for voters.

The former liberation movement has come to the informal settlement located to the southeast of Khayelitsha, Cape Town’s largest township, a week before the May 8th general election on a mission to win votes among its 20,000 residents.

The Democratic Alliance (DA) has run the Western Cape for 10 years, but voter surveys suggest the main opposition’s popularity in the province is declining, due to last year’s major water crisis and party infighting, and the ANC wants to capitalise on this.

In addition, research company Ipsos said recently that more than a third of South Africa’s 26.77 million registered voters had no strong allegiance to any of the three biggest parties, so plenty of votes are up for grabs in the last few days before ballots are cast.

As the morning progresses, the controversial Magashule and the ANC’s election campaign team move from one shack to another, handing out ANC T-shirts and imploring residents to vote for the party.

Engaging a man who emerges from one of the dwellings, Magashule says: “I see there are no proper roads, houses, toilets or lighting here. The DA has done nothing for you. We will try to help with this if you vote the ANC into power.”

Magashule then turns to the watching crowd and states the ANC will win the Western Cape this year because, unlike the DA, it cares about the province’s poor.

Local resident Letticia Martins is unconvinced by Magashule’s political grandstanding, as she is aware he has recently been accused of stealing millions of euro earmarked for the poor in the Free State Province when he was premier there between 2009 and 2018.

“I’m an ANC supporter but these leaders are no good for us,” she says. “They seek power to help themselves, and they forget about the people who vote for them once the election is over.”

Nevertheless, Martins says, like most of her neighbours, she will vote for the ANC on Wednesday because of two men: former South African president Nelson Mandela, and current president Cyril Ramaphosa.

“Mandela, he spent 27 years in jail so that I could be free, so I will not abandon his party. I also hope that Ramaphosa will keep his promise and remove these corrupt people [from the ANC] once the election is over,” she says.

Indeed, many political observers believe that if the ANC comes out on top in South Africa’s sixth post-apartheid general election, it will be due to Mandela and Ramaphosa’s popularity with the public rather than the party’s.

Under former leader Jacob Zuma, the ANC’s once broad appeal has been eroded by numerous corruption scandals that have tainted dozens of its leaders, and its inability to grow the economy and tackle unemployment since 2014’s general election.

Ramaphosa became ANC leader and South Africa’s interim president in December 2017 and February 2018 respectively, and since then he has promised a “new dawn” under his leadership.

To his credit, he has launched major inquiries into public sector corruption and the alleged capture of state institutions by criminal syndicates since replacing Zuma. He has also started to overhaul under-performing, state-run enterprises that were looted by corrupt officials.

However, the ANC’s candidates’ list for parliament and the nine provinces is littered with politicians accused of – but not charged with or convicted of – crimes ranging from corruption to murder and rape, which is a major turn-off for many voters.

Furthermore, the ANC’s refusal to remove these tainted representatives from its list before going to the polls has led to questions around the veracity of Ramaphosa’s promises, and whether he has a strong enough grip on the party to root out its corrupt members.

Will the party’s intransigence on this issue significantly undermine it at the polls, or will Ramaphosa’s popularity carry the ANC through to another victory?

The two main research companies surveying how South Africa’s political parties will fare on May 8th have recorded very different results when it comes to the ANC, the DA and Julius Malema’s Economic Freedom Fighters (EFF) in their latest polls on voters’ political preferences.

Ipsos’s latest survey, which was released on April 29th, points to the ANC securing an impressive 61 per cent of the vote when the voter turnout is pegged at 71 per cent of the registered voters. Survey participants also ranked Ramaphosa as the most popular leader in South Africa, which suggests that without him at the helm the ANC would struggle to reach this level of support.

The market researchers also said their survey pointed to the DA’s support falling to 19 per cent from 22.23 per cent last time out, while the radical left-wing EFF is on course to secure 11 per cent of the electorate this year, up from 6.35 per cent in 2014.

In contrast, the voter survey which the SA Institute for Race Relations (IRR) released on April 30th puts the ANC in serious trouble in the national ballot, with its support dropping to 49.5 per cent of the vote for the first time in its history.

The DA’s support nationally comes in at 21.3 per cent in the same survey, which is a slight drop on its 2014 result. But the big winner is the EFF which jumps to 14.9 per cent of the vote.

If something akin to the IRR’s survey predictions were to emerge, South Africa appears to be entering an era of coalition politics at national and provincial level for the first time in the post-apartheid era.