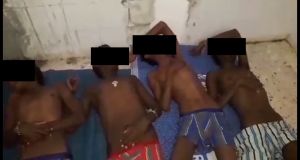 Child refugees in Sabaa detention centre in Libya. MSF says it has found “alarming” rates of acute malnutrition in the centre in southeast Tripoli

Children are among those severely malnourished at a detention centre in Libya, where hundreds of refugees and migrants have been locked up, many for more than six months, after they were intercepted trying to reach Europe.

More than one-third of the 300 people imprisoned there are children under 18, who MSF says are “significantly” more likely to be malnourished.

“What we see today in this single detention centre is symptomatic of an uncontrolled, unjustified and reckless system that puts the lives of refugees and migrants at risk,” said Karline Kleijer, MSF’s head of emergencies.

“The fact that Europe, too, is contributing to this suffering through policies that enable people rescued at sea to be forcibly returned to inhumane detention conditions in Libya is utterly unconscionable.”

About 5,700 refugees and migrants are currently held in DCIM-run detention centres, according to the United Nations Refugee Agency (UNHCR).

The majority already tried to cross the Mediterranean, but were intercepted by the Libyan coast guard, which receives tens of millions of euro in support and training from the EU because of a policy aimed at stopping arrivals to Europe.

The Irish Times has been in regular contact with dozens of detainees in Libya for the past seven months.

We are calling on European leaders to take action to end the harmful policy of containment on the #Greek islands and to immediately evacuate vulnerable people. https://t.co/qBNqay8iTz pic.twitter.com/HBFoDw7nKE

All of them have spoken about not getting enough food. On good days they may get two portions of plain macaroni or pasta; on bad days nothing.

Often they have no idea when they will next be fed, either because guards say they have a lack of funding or want to punish them for protests or escape attempts.

“Because of [a lack of] space and hunger, we never sleep,” said one Eritrean. Without occasional nutritional supplements provided by MSF, he said they would die.

In Abu Salim detention centre, southern Tripoli, detainees say they have received almost no food since October, besides what they pay vastly inflated prices for themselves.

In several centres detainees use hidden mobile phones to call family and ask them to send money. Though some share food, those without financial support are suffering badly, they said.

“Here on this detention centre you get meals from your pocket cash. No money, no food to take,” one said.

Detainees from countries including Eritrea, Ethiopia and Somalia say their families continue to beg or borrow, and sell property to support them, causing enormous stress.

“They sell everything to save my life and even they get into debt to feed me,” said one Eritrean.

Another estimated only 10 per cent of the food meant for detainees actually reaches them.

“If the leader of the detention centre gets happy by something in his own personal situation he tries to serve us food, if [he is] not happy he tries to stop it.

“Do you think that European governments don’t know about this? They know but want to hide all dirty things about Libya.”

DCIM did not respond to a request for comment.

A spokesman for Department of Foreign Affairs said it was “deeply troubled by the grave human rights abuses that migrants and refugees suffer in Libya . . . Regrettably, political fragmentation and the fragile security situation in Libya limit the capacity of the international community to end these abuses.”

While the EU’s Trust Fund for Africa was working on “improving conditions for detainees”, the spokesman said only “non-food items” were supported by EU funding.