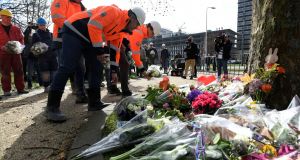 Construction workers place flowers at a makeshift memorial at the site of a tram shooting in Utrecht, on Tuesday. Photograph: Piroschka van de Wouw/Reuters 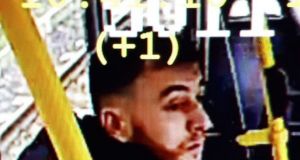 Dutch prosecutors have said they are still considering a possible terrorist motive for Monday’s shooting in Utrecht, and have so far uncovered no link between the main suspect and the three people who were killed.

The regional public prosecutor’s office said in a statement that the investigators’ view was based on the nature of the shooting on Monday, which took place on a tram, and on a letter found in the getaway car.

“Other motives cannot be excluded and are still being investigated,” the statement said, adding that a firearm had been recovered and several buildings in Utrecht had been searched. “At this point a terrorist motive is still being taken seriously.”

The suspected gunman, Gökmen Tanis (37), was detained on a street in the north of the city several hours after the 10.45am shooting at the central 24 Oktoberplein junction.

Turkish-born Tanis had served several short prison terms for a variety of offences including – most recently – rape and been conditionally released from jail on March 1st, Dutch court authorities confirmed to local media on Tuesday.

He had then appeared in court on March 4th and been sentenced to two further terms, for robbery and theft. Interviewed by the Algemeen Dagblad newspaper, the woman he was convicted of raping said she had since warned police of his behaviour, describing him as “a psychopath”.

The prosecutors’ statement said three people were seriously wounded in Monday’s shooting and four more sustained light injuries. It identified the dead as a 19-year-old woman from nearby Vianen and two men, aged 28 and 49, from Utrecht.

Separately, Dutch police said two other people, reportedly brothers, had been arrested on suspicion of involvement in the shooting.

Authorities initially declared the incident a possible terrorist attack before suggesting there may be other reasons, including a family or relationship dispute.

Several witnesses told Dutch media the shooting did not resemble a terror attack because the gunman had seemed to target one woman on the tram, and then fired at those who tried to help her.

Utrecht, the Netherlands’ fourth largest city, was locked down for much of Monday as authorities asked residents to stay at home. Students were prevented from leaving schools and colleges, and many shops in the area closed.

Ties Kortmann, a spokesman for the prosecutor’s office, confirmed on Tuesday that Tanis was being held on suspicion of manslaughter with a possible terrorist motive.

There were initial reports of shootings in other areas of the city on Monday but these were later discounted by police. Police said a red Renault Clio was stolen near the Oktoberplein shortly before the attack, and was later found abandoned with a note, the contents of which have not been released.

Members of the public and Utrecht’s mayor placed bunches of flowers near the busy junction where the shooting took place. One bunch carried a message in Dutch saying: “We are sad and deeply shaken. Utrecht has been hit hard; straight through the heart. Strength!! Peace and Love.” – Guardian