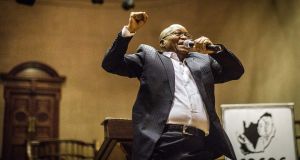 Former South African president Jacob Zuma has suffered a legal setback ahead of his expected appearance in court on Friday on corruption charges linked to a multibillion rand government arms deal.

Earlier this week South Africa’s national director of public prosecutions, Shaun Abrahams, wrote to Mr Zuma’s lawyers to say he would not agree to a request to halt the criminal case against their client.

Mr Abrahams indicated in his letter that only a court could make such a determination, but it remains unclear whether Mr Zuma is willing to make a legal application to the Durban high court seeking such a stay in prosecution.

The former president’s lawyers had asked the National Prosecuting Authority (NPA) to halt its case against their client pending the outcome of a separate legal fight Mr Zuma is in over whether the state should continue to pay the legal fees related to his criminal prosecution.

The lawyers argued the corruption case should not go ahead because of a legal application made by the Democratic Alliance (DA) party to have a 2006 agreement signed by the presidency set aside. That deal states Mr Zuma’s legal costs related to the corruption charges will be paid for by the state.

Effectively, Mr Zuma wants his prosecution halted until it is made clear who will have to pay his legal bill.

In addition to its main application, the DA is asking the North Gauteng high court to rule that 15.3 million rand (€1 million) of taxpayers’ money spent on Mr Zuma’s defence to date be paid back to the national treasury.

If the main opposition party’s case is successful, Mr Zuma’s approach of appealing every legal decision that goes against him to a higher court might have to change, due to the financial costs of continuing with the strategy.

The 16 corruption, fraud and money-laundering charges Mr Zuma currently faces were originally withdrawn in 2009 shortly before he became president. But the DA immediately set about trying to have them reinstated, arguing the decision to retract them was irrational.

Since then Mr Zuma has appealed each decision that went against him in the case to a higher court, a process that drew the matter out for nearly 10 years.

However, shortly after Mr Zuma was forced from office in February by the ruling African National Congress party, South Africa’s highest appeals court, the supreme court of appeal, ruled that the former president must face the corruption charges.

Following his first appearance in court on the reinstated charges in April, Mr Zuma’s lawyers told the court they were planning to apply for a review of the NPA’s decision to prosecute him.

However, he missed the May deadline to file the relevant paperwork with Durban high court in KwaZulu-Natal Province, according to the NPA, which wants the corruption case to begin on November 12th.

It was also reported on the Daily Maverick news website this week that Mr Zuma has dispensed with the high-level legal team he has used to represent him in matters related to the corruption case to date.

This development appears to coincide with current South African president Cyril Ramaphosa’s decision not to oppose the DA’s application to have Mr Zuma pay for his own legal fees.

It remains unclear who will represent Mr Zuma in Durban for today’s hearing, which is expected to be short and involve another postponement. Nevertheless, his supporters from KwaZulu-Natal have indicated they will be there in large numbers to back him.

The charges against Mr Zuma first arose from 783 questionable payments made to him in the late 1990s that were linked to a French arms company. He denies any wrongdoing.