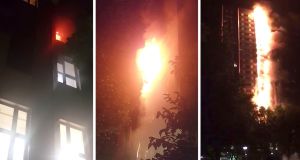 Advice to residents in Grenfell Tower to stay put in their flats when fire broke out had “effectively failed” half an hour after the blaze started, an inquiry into the tragedy has heard.

The fire spread so fast that the stairwell that was the only route of escape was already filled with smoke an hour before the fire service changed its advice and told residents to evacuate.

Seventy-two people died as a result of the fire in the west London tower block in June last year, making it the deadliest residential fire in the capital since the second World War.

On its first day taking formal evidence, the inquiry heard from fire safety experts who have produced five reports into how the fire started and spread so fast. Barbara Lane, a chartered fire engineer, said there was “an early need for the total evacuation of Grenfell Tower”. But she acknowledged that it was not an easy decision to make.

Like most tower blocks built in the 1970s Grenfell Tower was designed so that each flat was effectively a concrete box that would contain any fire that started within it. When the building was refurbished in 2016, new window surrounds and cladding for the exterior walls were made of partially flammable materials.

Dr Lane said that the materials in the cladding system, individually and together, did not comply with the recommended fire performance set out in building guidelines.

“I conclude that the entire system could not adequately resist the spread of fire over the walls having regard to height, use and position of the building. Specifically, the assembly failed adequately to resist the spread of fire to an extent that supported the required “stay put”strategy for this high-rise building. There were multiple catastrophic fire-spread routes created by the construction form and construction detailing,” she said.

The inquiry heard a recording of the first 999 call from the night of the fire, made by Behailu Kebede, one of three people living in flat 16 on the fourth floor, where the fire started.

A report by Niamh Nic Daéid, a forensic scientist at Dundee University, said the fire seems to have started in or near the fridge freezer in flat 16. Her report described how Mr Kebade was wakened by a smoke alarm shortly before 1am and found smoke coming from the fridge freezer and quoted from an account by John O’Hanlon, one of the first firefighters to enter the flat.

“You wouldn’t recognise it as a fridge, just a charred rectangle with a bit of melted stuff at the bottom that was still alight. The flame was around 30cm high. The window had gone by then, broken . . . that’s when we noticed the window had completely gone. Even the frame wasn’t there and we noticed that it was on fire, that the window surround was on fire,” he said.

The inquiry also saw several videos filmed on mobile phones, showing the rapid upward spread of the fire from a window on the fourth floor.

Dr Lane catalogued a number of fire safety breaches in the tower, telling the inquiry that none of the fire doors between the fourth and 24th floors were “compliant with fire test evidence relied upon at the time of installation”. The inadequacy of the doors helped smoke and flames to spread so that the heat in the lobbies would have caused “immediate pain” to exposed skin, while thick black smoke deterred residents from fleeing through the lobbies.