New record high for number of Covid patients in US hospitals

There were almost 59,000 Covid-19 patients in hospitals across the US on Monday

The US has became the first country to surpass 10 million coronavirus infections. The country's latest seven-day average is more than the combined average for both India and France. Video: Reuters 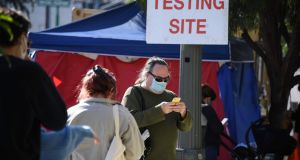 People wait in line to get tested for Covid-19 in Los Angeles, California, on Monday. Photograph: Getty

There were just over 59,000 Covid-19 patients in hospitals across the United States on Monday, the country’s highest number ever of in-patients being treated for the disease, as new infections at record levels for the sixth consecutive day.

The statistics tallied by Reuters cemented the United States’ position as the nation worst affected by the coronavirus pandemic, even as drugmaker Pfizer provided some hope with successful late-stage tests of its vaccine.

President-elect Joe Biden hailed Pfizer’s progress, but urged Americans to wear masks as he noted a vaccine may not be widely available for many months.

The number of Americans with Covid-19 currently hospitalised has surged around 73 per cent over the past 30 days to at least 59,008 - a record level that surpasses the previous high of 58,370 on July 22nd.

Hospitalisations are a key metric of how the pandemic is progressing because, unlike case counts, they are not influenced by the number of tests performed.

Texas reported the highest number of hospitalized patients with 6,103, followed by Illinois with 4,409 and California with 3,668 patients, according to the Reuters tally.

Mr Biden, who spent much of his election campaign criticizing president Donald Trump’s handling of the pandemic, pledged over the weekend to make tackling the pandemic a top priority.

Mask wearing has become a political issue in the United States, with Mr Trump mocking Mr Biden for wearing a mask during the campaign and many conservatives contending masks infringe on their individual freedom.

Politics aside, the data shows that the United States is experiencing its worst phase so far of the outbreak.

It has reported more than a million new cases in the past 10 days, according to the Reuters tally, the speediest surge in infections since the country reported its first Covid-19 cases, in Washington state, 294 days ago.

More than 770,000 new cases were diagnosed in the week ended November 10th, up 34 per cent over the previous seven days, according to the tally. The country has reported a total of around 10.13 million cases.

Deaths over the week to November 10th increased 15 per cent, or more than 6,600 people, over the previous week. That was the highest one-week total since mid-August, taking the overall death toll for the pandemic to more than 238,000.

Worryingly for officials, health experts say the death toll tends to spike four to six weeks after a surge in infections.

In Texas, which became the first US state to surpass one million cumulative coronavirus cases on Saturday, authorities in the El Paso county on Monday said they were bringing in 10 temporary refrigerated morgue trailers in anticipation of further fatalities. - Reuters