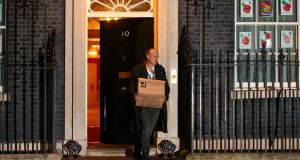 Dominic Cummings has left Downing Street with immediate effect after losing a power struggle over the direction of Boris Johnson’s government. Mr Cummings, who was expected to stay until the end of the year, was pictured leaving Downing Street by the front door carrying a box of papers.

Former director of communications Lee Cain, who resigned on Wednesday, has also left with immediate effect. The two men had a 45-minute meeting with the British prime minister on Friday, during which he is reported to have told them that their continuing presence was unwelcome.

Bernard Jenkin said Mr Johnson needed to restore the respect, integrity and trust which had been lacking in recent months in Downing Street’s dealings with MPs.

“I’m not surprised in a way that it is ending in the way it is. No prime minister can afford a single adviser to become a running story, dominating his government’s communications and crowding out the proper messages the government wants to convey. Nobody is indispensable,” he told the BBC.

Mr Cummings, who directed the Vote Leave campaign in the 2016 Brexit referendum, became Mr Johnson’s paramount adviser when he became prime minister last year. Mr Cummings masterminded the parliamentary strategy over Brexit that provoked opposition parties into triggering a general election last year and he was one of Mr Johnson’s key strategists during that campaign.

Mr Cummings and his allies from the Vote Leave campaign including Mr Cain had a tight grip on the running of Downing Street until this week, when a rival faction including the prime minister’s fiancée Carrie Symonds persuaded the prime minister not to appoint Mr Cain as his chief of staff.

“Absolutely not. That is simply false. The government’s position in relation to the future trade agreement negotiations is unchanged,” the prime minister’s official spokesman said.

British and EU negotiators met in London this week and they will resume talks in Brussels next week. Contrary to rumours in Whitehall earlier this week, Britain’s chief negotiator David Frost and Brexit adviser Oliver Lewis have not followed Mr Cummings and Mr Cain out of Downing Street.

Opposition parties have accused the government of being preoccupied by internal feuds at a time when it should be focused on coronavirus and the Brexit negotiations. The Scottish National Party’s leader at Westminster Ian Blackford said that the departing advisers were like rats abandoning a sinking ship.

“It tells you everything you need to know about this arrogant, incompetent and self-serving Tory government that they are ditching their responsibilities – at the exact moment their reckless decisions are causing the maximum damage to people across the UK,” he said.

“If the prime minister had a shred of integrity he would pack his own bags and go with them.”