‘Irrational and unlawful’ finding against Ramaphosa set aside

Inquiry last year had found South African leader should be investigated over €28,000 donation 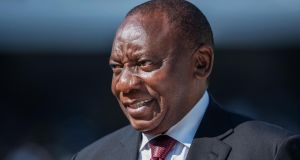 The high court ruling will give Cyril Ramaphosa’s administration a timely credibility boost, as one of the central planks of his campaign to become leader of the ANC in 2017 was a promise to fight public sector corruption. File photograph: Michele Spatari/AFP/Getty

A South African court has set aside an anti-corruption watchdog’s investigation into President Cyril Ramaphosa that concluded he intentionally misled parliament about the origins of a campaign donation.

Pretoria high court ruled on Tuesday that public protector Busisiwe Mkhwebane’s findings were “irrational and unlawful” and that Mr Ramaphosa was not legally obliged to disclose to parliament his 2017 party election campaign’s funding arrangements.

The ruling will give Mr Ramaphosa’s administration a timely credibility boost, as one of the central planks of his campaign to become leader of the African National Congress (ANC) in 2017 was a promise to fight public sector corruption and graft.

If Ms Mkhwebane’s findings had been upheld, Mr Ramaphosa would likely have faced calls to resign as president for lying to parliament.

Last year, Ms Mkhwebane’s inquiry found that South Africa’s president should be investigated by the National Prosecuting Authority over a 500,000 rand (€28,000) donation made to his campaign by services company Bosasa, which is now known as African Global Operations.

Bosasa and its late chief executive Gavin Watson have been accused of widespread public sector corruption and bribery at an ongoing commission of inquiry.

However, she went on to broaden its scope, claiming evidence she had received suggested there was merit to allegations that the president was also involved in money-laundering, and that he had violated parliament’s code of ethics.

When Bosasa’s payment first came to light Mr Ramaphosa initially told MPs it was made to his son Andile, who had a contract with the services company, and that it was above board.

A few weeks later, however, he confirmed the payment in question was made to his 2017 election campaign account, but that his back-up team had not made him aware of it.

Handing down the court’s ruling, judge Elias Matojane said Ms Mkhwebane’s findings had displayed a “complete lack of basic knowledge of the law and its application”. Furthermore, the judge called some of her findings “unfathomable”.

The court found Ms Mkhwebane did not even have the jurisdiction to investigate Mr Ramaphosa’s election campaign funding, as her sphere of competence was limited to matters of state affairs and public administration.

The judges were particularly scathing about the allegation of money-laundering, saying the ombudsman’s findings on this were “reckless” as there was no evidence that such a crime was at play.

The ruling has heaped pressure on Ms Mkhwebane, who is expected to appear before a parliamentary committee later this year to give reasons why she should not be removed from office.

The public protector has lost a string of high-profile hearings related to her investigations since being appointed by former president Jacob Zuma in 2016. She has also faced allegations she is biased against Mr Ramaphosa and his allies.