Afghanistan: Released Taliban must provide ‘written guarantee to not return to battlefield’ 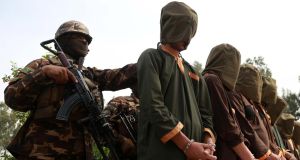 Afghan security officials parade a group of suspected militants allegedly accused of planning attacks on government and security forces after their arrest, in Jalalabad, Afghanistan, on Tuesday. Photograph: Ghulamullah Habibi/EPA

Afghan president Ashraf Ghani has signed a decree to release 1,500 Taliban prisoners as a move to launch direct talks between the Afghan government and the hardline insurgent group to end the 18-year-long war in Afghanistan, according to a copy of the decree seen by Reuters.

The two-page decree – to be made public later by Mr Ghani’s office – said all released Taliban prisoners will have to provide “a written guarantee to not return to the battlefield”.

A spokesman for the president’s office said earlier: “President Ghani has signed the decree that would facilitate the release of the Taliban prisoners in accordance with an accepted framework for the start of negotiation between the Taliban and the Afghan government.”

It had been expected that at least 1,000 Taliban prisoners would be released this week, five official sources said earlier. However, the Taliban had wanted the Afghan government to release 5,000 fighters.

The Taliban had sent vehicles to collect fighters and earlier said they would honour their side of the deal by handing over 1,000 government troops.

The release is part of a deal signed by the United States and the Islamist militant group last month that would allow US forces and Nato troops to withdraw from Afghanistan.

The Taliban had demanded the release of the prisoners as a confidence-building measure.

A senior Taliban leader in Doha, the group’s political headquarters, said vehicles had been sent to an area near Bagram Prison, north of the capital Kabul, to fetch the freed fighters.

“After our conversation with Zalmay Khalilzad [the US special envoy for Afghanistan] on Monday, in which he conveyed to us the release of our 5,000 prisoners, we sent vehicles to pick them up,” he said.

The issue had become one of the biggest sticking points in any progress towards peace, complicated further by differing wording of documents between the US and the Taliban and the US and the Afghan government.

“The Taliban needs this to show to their rank and file. For the foot soldiers on the ground, a reduction-in-violence agreement, a troop-withdrawal agreement signed in Doha means nothing, fighters returning is something they can feel,” said an Asian diplomat in Kabul.

Mr Khalilzad attended Mr Ghani’s swearing-in ceremony in Kabul on Monday. The president had previously rejected the Taliban demand for its fighters to be released. – Reuters