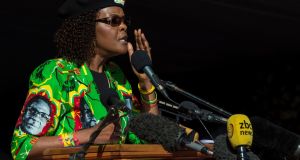 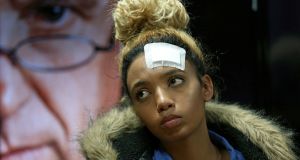 Gabriella Engels, who claims to have been assaulted by Grace Mugabe, looks on during a news conference last week. Photograph: Siphiwe Sibeko/Reuters

South African police had placed border posts on “red alert” to prevent her from leaving the country, but the international relations minister granted the wife of 93-year-old president Robert Mugabe diplomatic immunity.

“I hereby recognise the immunities and privileges of the First Lady of the Republic of Zimbabwe, Dr Grace Mugabe,” said the minister, Maite Nkoana-Mashabane, in a notice published in South Africa’s Government Gazette on Sunday but signed on Saturday.

Zimbabwean state media reported that the president and first lady arrived in Harare aboard an Air Zimbabwe plane in the early hours of Sunday. A source confirmed this.

The young woman who made the assault allegation, Gabriella Engels, has accused Grace Mugabe of whipping her with an electric extension cable a week ago as she waited with two friends in a luxury hotel suite to meet one of Mugabe’s adult sons.

President Mugabe attended a South African Development Community (SADC) summit in Pretoria on Saturday, but his 52-year-old wife was not there or part of his delegation.

Harare has made no official comment on the issue and requests for comment from Zimbabwean government officials have gone unanswered.

“The DA will be demanding an immediate parliamentary inquiry into (the) government’s complicity in allowing Zimbabwean First Lady Grace Mugabe to flee the country in the dead of night to avoid criminal prosecution,” John Steenhuisen of the DA said in a statement.

Compounding the awkward diplomatic situation, commercial flights between Zimbabwe and South Africa were grounded on Friday and Saturday, affecting both national carriers, after unexpected checks for operating permits.

South African Airways resumed flights to Zimbabwe, it said in a statement on Sunday, and an Air Zimbabwe flight also departed from Harare to South Africa on Sunday morning.