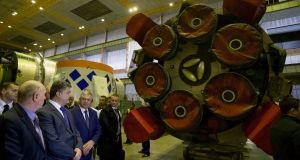 Ukraine’s President Petro Poroshenko visiting the Yuzhmash factory in Dnipro in October 2014. The factory has been linked with the supply of powerful missile engines to North Korea. Photograph: Mykhailo Markiv/Ukrainian Presidential Press Service

Ukraine’s president, Petro Poroshenko, has ordered an urgent investigation into a contested report that a factory in his country may have supplied powerful missile engines to North Korea in breach of international sanctions.

In a report published this week, the London-based International Institute for Strategic Studies (IISS) said North Korea had made rapid strides in its long-range rocket programme thanks to motors acquired covertly in Ukraine or Russia.

Recent test launches have fuelled fears that nuclear-tipped North Korean rockets could strike US territory, signifying progress that the IISS attributed to Pyongyang’s use of modified Soviet-era missile engines built at Ukraine’s Yuzhmash facility or the Energomash plant in Russia.

The author of the report, IISS missile expert Michael Elleman, told the New York Times that the motors probably came from Yuzhmash. The plant is based in the eastern city of Dnipro, about 250km from territory controlled since 2014 by Russian-backed separatists.

The claims have been denied by top officials in Ukraine, which relies heavily on US support in countering Russian efforts to stop it integrating with the West.

“No matter how absurd the allegations made against Ukraine, as responsible partners we should carefully check the information,” Mr Poroshenko said.

“That is why I have urgently ordered a detailed and multifaceted investigation of the situation”.

He said it would be led by the secretary of Ukraine’s security and defence council, Oleksandr Turchynov, and would involve officials from the defence industry and the Yuzhmash factory, and should deliver results later this week.

“I’m sure it will allow us to confirm the erroneousness of speculation about a ‘Ukrainian fingerprint’ in the North Korean ballistic [missile\ story, and probably identify the real source and purpose of this groundless fake,” Mr Poroshenko added.

Earlier this week, Mr Turchynov said Ukraine regards the North Korean regime as “totalitarian, dangerous and unpredictable, and supports all sanctions against this country”.

“Ukraine has never supplied rocket engines and any missile technology to North Korea. We believe that this anti-Ukrainian campaign was triggered by Russian secret services to cover their participation in the North Korean nuclear and missile programmes,” he added.

The allegations were also denied by Yuzhmash, which has been the focus of North Korean attention before: in 2012, two North Korean agents were jailed in Ukraine for trying to acquire secret missile information from factory employees.

Other western missile experts have questioned the findings of the IISS report, and unnamed US intelligence officials told both Reuters and CNN that North Korea’s latest rocket engines were probably built inside the isolated country.

Officials in Moscow quickly drew attention to the allegations against Ukraine, but US state department spokeswoman Heather Nauert said the country “has a very strong non-proliferation record, and that includes specifically with respect to” North Korea.