Barcelona attacks: police fear suspect may have crossed into France 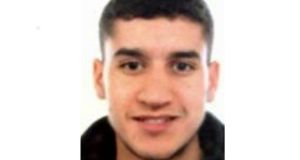 A handout picture released by the Catalan regional police shows Younes Abouyaaqoub, one of the main suspects of the Barcelona and Cambrils attacks. Photograph: AFP 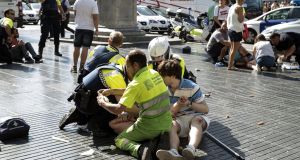 Medics and police tend to injured people near the scene of a terrorist attack in the Las Ramblas area on Thursday. Photograph: Getty 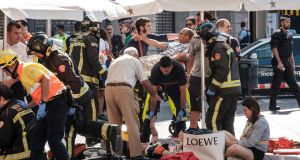 Paramedics tend to one of the many pedestrians struck by a van driving through crowds on Las Ramblas. Photograph: New York Times 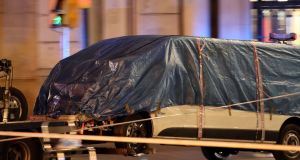 The van used in the Barcelona attack is towed away from the area where it crashed into pedestrians at Las Ramblas. Photograph: Reuters

Spanish police hunting for a suspect after the Barcelona van attack that killed 13 people said on Sunday they could not rule out that he had slipped over the border into France.

Spanish police said security operations were under way in Catalonia and on the French border as they try to find Moroccan-born Younes Abouyaaqoub who they believe is the only one of 12 suspects still at large.

Spanish authorities said terror cell responsible for the attacks has been dismantled, but the search is still on for Abouyaaqoub, a 22-year-old Moroccan named in Spanish media as the suspected driver of the van used in the massacre on Las Ramblas that left 13 dead and at least 120 injured.

An Irish family are among the injured. Norman Potot suffered kidney injuries, his son Nathaniel (5) a broken leg and his daughter Nailah a fractured arm. Pearly Fernandez Potot escaped with minor injuries.

Police in Spain have also linked three rental vans to the fugitive at the centre of a manhunt following terror attacks in Barcelona and a nearby seaside resort.

A police official said all three vans were rented using the credit card of Abouyaaquoub, who remains at large and is the focus of a manhunt in north-east Spain.

The official said one of the vans was used in the Barcelona attack, while another was found in Vic, 44 miles north of Barcelona on the road to Ripoll, where all the main attack suspects lived, and the third was found in Ripoll itself.

News agencies reported that police believed the cell wanted to load the vans with explosives for a big attack, but their plans changed after the house where their plot was being hatched blew up on Wednesday in Alcanar.

Reports suggest there were 120 gas canisters being stored in the house in Alcanar.

The investigation is also focusing on a missing imam who police believe could have died in that house explosion.

Police believe Abdelbaki Es Satty radicalised the young men in the extremist cell. Spanish interior minister Juan Ignacio Zoido said five members of the cell were shot dead, four were in custody and as many as two were killed in an explosion.

He said no new attacks were imminent, the country’s terrorist threat alert will be maintained at level four, and security at popular events and tourist sites around the country will be reinforced.

Mossos, Catalonia’s police force, said the cell involved 12 people and they were still looking for one who fled, but they had yet to confirm the identities of those killed in the explosion.

Some 34 nationalities were among those wounded in Las Ramblas and in Cambrils, which lies around 70 miles to the south west. One person was killed in Cambrils when five men drove a car at pedestrians.

Catalan authorities said they have identified some of the victims of the attack.

The victim of the second assault in Cambrils - bringing the death toll to 14 - has been identified as a Spanish woman.

Family members and government officials have said a Belgian and a Canadian are also among the dead following the attack in Barcelona. On Friday it emerged another suspect, Moussa Oukabir, who is thought to have rented the van, was among five men shot dead as they launched a second attack in the coastal town of Cambrils.

The teenager, said to be 17 or 18, is suspected of using his brother’s documents to hire the vehicle that ploughed through pedestrians in the tourist hotspot on Thursday evening.

He reportedly died along with Said Aallaa (19) and Mohamed Hychami (24) who were part of a group that mounted a similar attack in Cambrils that left one woman dead and six people injured.

The identities of the other two dead attackers are yet to be confirmed by police. Four men, aged 21, 27, 28 and 34, who were arrested in connection with the attack remain in custody.

Three are Moroccan and one Spanish and police said none of them was previously known to the security services for terror-related reasons. Moussa Oukabir’s older brother, Driss Oukabir, is reported to be one of those detained.

Police said the terrorists behind the rampage were preparing bigger attacks, with the suspected gas explosion on Wednesday in Alcanar believed to have denied the terror cell of materials to use in larger-scale operations.

Catalan regional police official Josep Lluis Trapero told reporters on Friday: “We think they were preparing at least one or more attacks in Barcelona.

Fears are continuing to grow over the fate of seven-year-old Julian Cadman, understood to be a dual British-Australian national, who became separated from his mother during the Barcelona attack.

Speaking after the family made an initial plea for help to find the missing boy, prime minister Theresa May said a child with dual British nationality was believed to be among those unaccounted for.

Julian’s father and grandmother are believed to have arrived in Spain on Saturday after travelling from Australia.