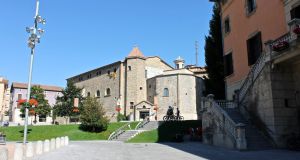 “Nobody suspected anything of this kind could be afoot, not the mayor’s office, not the residents - nobody,” deputy mayor Maria Dolors Vilalta said. Photograph: iStock

The Plaça Cívica is at the heart of the small Catalan town of Ripoll. On one side of the square sits a Benedictine monastery founded in the ninth century, while a large Catalan independence flag hanging from the town hall next door reflects the nationalist leanings of many of its residents. A handful of cafés and shops sit on the other side of the square.

However this calm spot in the Catalan highlands, a 90 minute drive north of Barcelona, has been stunned and bewildered by the news that several of its residents were involved in the two terrorist attacks that killed 14 people and injured dozens.

An apartment just off the Plaça Cívica belonging to an imam - whose whereabouts have not been confirmed - was searched by police on Saturday as part of the investigation.

According to deputy mayor Maria Dolors Vilalta, another seven people who had been living in Ripoll have so far been linked to the double attack, which saw a van plough through pedestrians on Barcelona’s Ramblas on Thursday afternoon before a car deliberately struck passers-by in Cambrils a few hours later.

“Nobody suspected anything of this kind could be afoot, not the mayor’s office, not the residents - nobody,” Vilalta told The Irish Times.

Three of five terrorists subsequently killed by police in Cambrils were from the town, with media naming them as Moussa Oukabir, a 17 year-old who the Catalan police initially suspected was the still unidentified driver of the van, Said Allaa, and Mohamed Hychami.

Driss Oukabir, the older brother of Moussa, was arrested soon after the first attack, with police believing he rented the van used to carry it out. On Friday, police arrested two more men in Ripoll.

In addition, Younes Abouyaaquob, whom police have been searching for in relation to the attacks and as the possible driver of the van, was from the town.

All are part of a Moroccan community which started arriving here two decades ago and now numbers nearly 700, a substantial number in a town that has a population of 11,000. Of the young men linked to the attacks, the older ones arrived as children with their parents, who sought opportunities in a booming economy. Many of the younger ones were born in Spain.

“These boys had grown up here, they’d gone to school here, they had done sport here and worked here,” Vilalta said. “Nobody could say there were problems in terms of coexistence - on the contrary.”

It’s a sentiment that is shared by locals, many of who had watched these suspected terrorists grow up.

He adds: “I’ve seen them playing football together and they spoke Catalan and when one of them committed a foul the other would swear at him in Catalan.”

Although the Moroccan youngsters appear to have spent plenty of time together, the picture that emerges is not one of a ghettoized community.

“I’ve seen these guys out at parties and they’re normal, 100 per cent integrated,” says Filgueras Puig, who says his brother-in-law worked with one of the terrorists shot by police in Cambrils.

Several of those involved in the recent attacks would meet socially at a typical Spanish bar called “Marcos” in the town.

Outside the bar, another neighbour, who prefers not to give his name, is equally confused by the events of recent days, given what he knew of those who took part. His children used to play in the same park as Moussa Oukabir, when the 17-year-old was a small child.

“He’s just a kid, so I wonder if he got involved without knowing what he was doing,” he says. This local man insists that racism is not rife in Ripoll, although he says the closure of many textile plants in the area in recent years has had a deep social impact.

“This town has other forms of exclusion,” he says. “Socially there’s a lot of division and [Moussa and Driss Oukabir] belonged to that lower class.”

Toni Moreno, a 30-year-old, knew the older of the two brothers.

“Driss was closer to me in age and so went out with people of my age. He was sociable and normal,” he says, remembering a young man who drank alcohol and mixed with his Catalan peers.

“It’s stunned me, because these are people you’ve known all your life.”