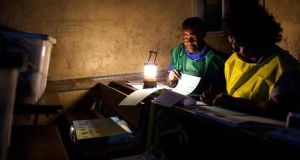 The leader of Mozambique’s main opposition party has called last week’s general election “the most fraudulent the country has ever seen”, as senior party officials met to consider their next move.

Renamo leader Ossufo Momade told reporters in the capital, Maputo, that the party’s national political commission was meeting to devise peaceful ways for the country to overcome the disputes that have arisen from the October 15th election.

“The Renamo party has been receiving pressure from all sectors of Mozambican society and from other quarters to do everything to restore the electoral truth,” Mr Momade said in his opening address at the extraordinary session of the commission.

Partial election results released by the National Election Commission show President Filipe Nyusi and his ruling Frelimo party heading for a crushing victory over its rivals in the presidential, parliamentary and provincial polls.

With 138 of Mozambique’s 160 voting district for the presidential race counted, results showed Mr Nyusi, who is seeking a second term as president, had a commanding lead with 73 per cent of the vote while Mr Momade was in second place on 21 per cent.

Frelimo was also on course to win a large majority in parliament and to take control of at least nine of the 10 provinces. The full official election results must be released no later than 15 days after the polls have taken place.

However, opposition parties and some election observer missions say their analyses of the poll and its vote-counting process have turned up irregularities that indicate it was rigged to ensure Frelimo is returned to power.

On Saturday, Renamo called on the courts to annul the election and for a new one to be held, saying Frelimo had violated an August peace deal both groups had signed which states no party should “commit acts of violence and intimidation in the pursuit of political objectives”.

On Monday, the Mozambique Election Process Bulletin, a newsletter published by the Maputo-based NGO the Centre for Public Integrity, supported the allegations that significant electoral fraud had taken place.

“District election results show that entire districts were stuffing the ballot boxes for Nyusi, either with physical ballot paper or by changing the results at polling station or district level,” it said.

Last week’s election was billed by many political analysts as a test of the peace deal that Frelimo and Renamo recently signed, as their joint history is one of conflict.

The parties fought a brutal civil war between 1975 and 1992 that devastated the economy and left one million people dead. Renamo picked up arms again in 2013 to fight a low-level guerilla war against the government that only ended when the August accord was signed.