Flooding is the new normal for a Ugandan border town 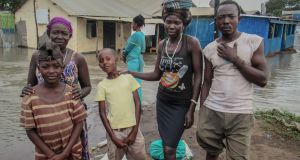 Akwero Beatrice, her sister Alaker and their children have been forced to leave their home, which is waist-deep in water. They are moving to a relative’s house but do not know how they will survive long term. Photograph: Sally Hayden 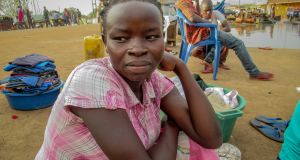 Shandiro Hcary (22) has been staying on the side of the road with her children for four days, since their home was flooded with water. She said she is afraid to sleep in case they get robbed. Photograph: Sally Hayden. 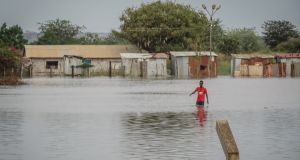 A man wades through water in Elegu, northern Uganda, on the border with South Sudan, where businesses and homes damaged by flooding. Photograph: Sally Hayden 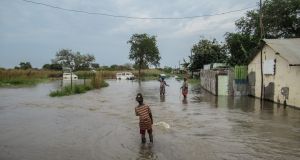 A woman carries some belongings from her flooded home in Elegu, northern Uganda, on the border with South Sudan. Photograph: Sally Hayden

It’s been five days since water came rushing into her home in Elegu, northern Uganda, and Akwero Beatrice was forced to leave.

On Wednesday, she waded back in again, crossing an area larger than a football pitch of waist-high water, to salvage some okra, the only food she had left. Beatrice wrapped it in a plastic bag and put it inside a bucket, which she carried on her head to keep it dry.

“This is the worst,” she said after she finished the journey and was reunited with her children, who were waiting on higher ground. “The river, the source of the water chased us out of our home. We left all our things. We just rushed our bodies out for our survival,” she said.

Elegu is a bustling town of roughly 10,000 people. It’s right on the border with South Sudan, and has a heavy police presence and a regular flow of trucks and buses passing through. Elegu’s residents are growing impatient at the Ugandan government for offering no support as the flooding gets worse, while speculating that climate change means this is their new normal.

Even when there’s not rain in Elegu itself, water rushes in from other parts of the region. This year, Uganda’s rains have been unusually heavy.

In 2017, the last time flooding was this bad in Elegu, at least six people died, according to locals. One remembers a baby washing up alive in a basin. The baby was taken away by charities, after it proved impossible to trace the parents.

Elegu’s recent problems with weather are well known. It has prompted a range of theories, including that the flooding could be divine punishment for a historic border dispute between Uganda and what used to be Sudan. “You know God doesn’t want this issue of land-grabbing, that’s why he is taking the land by water,” said a former South Sudanese rebel.

However, the flooding also echoes weather changes across East Africa. At the end of October, South Sudan’s government declared a state of emergency due to floods in much of the country. Kenya, Ethiopia, Somalia, Sudan, Tanzania and Djibouti have also suffered devastating flooding since July which has killed hundreds and displaced hundreds of thousands of people. In total, 2.5 million Africans have been affected, according to the UN.

The heavy rains and flooding are believed to be related to the Indian Ocean Dipole, a phenomenon which is responsible for extreme weather, and is being exacerbated by global warming.

At Mount Kenya Bar, Lodge and Restaurant, one of the first stops in Elegu, a waitress wades in Wellington boots to reach half-submerged fridges and fetch beers.

Watching closely is manager Julian Wangari Muriuki (47), who left her children in Kenya two years ago to come to the border and earn money to send back to them.

“It’s destroying our business deals,” she said. “This water is disturbing the lodge. We have 20 rooms but no customers. The customer is scared away. The water can enter anything.”

Muriuki pays 1 million Ugandan shillings (€245) in rent each month, and worries she won’t be able to continue much longer. “You cannot tell a landlord that you don’t have money,” she said.

Abas Akakeeto (34) also came to Elegu for work, from Ugandan capital Kampala, more than 400km away by road. He sells trousers and shorts to men in the street.

“The life here is dangerous. The water always comes,” he said, adding that he is worried about climate change. “It rained from April to December – more rain than usual.”

Many people have left the town, Akakeeto said, destroying business. “Here we depend on the population. When people feel the water is coming here they run away to South Sudan.”

The clothes-seller pointed out locals who have been ousted from their homes and now sleep on mattresses on the street. One was Shandiro Hcary (22), who sat ironing shirts on a slope stretching into the water.

“[The rain] has spoiled my home. The water has entered our houses,” she said. “We don’t sleep, we just sit with our things. When you sleep people steal.”

She said her children are struggling with the cold at night, and the town’s unaffected residents are transient and from such a varied mix of backgrounds that they are unwilling to help.

“There are so many different tribes here, people have different hearts,” Hcary said, adding that she had sadly accepted this patch of ground as her home for the moment.

“The water will leave but it will take time. It reduced but it came back.”