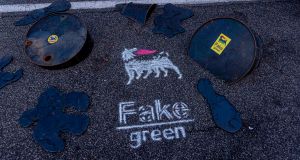 A logo for Italian energy company Eni is drawn on the ground with the words 'Fake Green' during a protest outside its headquarters. Many governments continue to subsidise the fossil fuel industry, the main emitter of greenhouse gases, on a grand scale. Photograph: Stefano Montesi/Corbis/Getty

Greenwashing: loosely defined as a form of marketing spin to play up one’s green credentials. It’s an accusation typically levelled at companies overegging their own eco-friendly policies but it applies equally well to governments. For 2½ decades, they have talked the talk on climate change but delivered what UN secretary general António Guterres described at this week’s climate summit in Madrid as a “totally inadequate” response to the crisis.

They have continued to subsidise the fossil fuel industry, the main emitter of greenhouse gases, on a grand scale, effectively depressing the price of fuels such as oil and gas, which only encourages greater production and consumption.

The International Energy Agency estimates that global fossil fuel subsidies ranged from $300 to $600 billion per year between 2008 and 2015. At the same time, they have also failed to curb emissions by attaching greater taxes and penalties to carbon production.

Much is made of US president Donald Trump’s wilfully ignorant stance on climate change – he has described it as a Chinese plot to make US manufacturing uncompetitive. But the Irish Government’s stance, held in check as it is by the State’s two largest lobby groups – the Irish Farmers’ Association (IFA) and employers’ group Ibec, hasn’t been much better.

Ireland remains way off course in terms of its carbon emissions targets for 2020 and 2030 while its energy policy is a mess of contradictions. While it has pledged that renewables such as wind and solar will provide 70 per cent of all electricity used here by 2030, it continues to entice high-energy data centres here. National grid operator EirGrid calculates that, by 2027, data centres will use the same amount of electricity as Dublin does now.

If you consider the actions taken by individual US states in defiance of the White House – California is endeavouring to set its own strict vehicle emission rules – you could reasonably conclude that Ireland is more of a climate refusnik than Trump’s America.

The problem, it seems, is that governments are programmed to act nationally and are beholden to a narrow range of sectoral interests while climate change is a global problem that stretches beyond borders and beyond five-year electoral cycles. It wasn’t until China began breathing in its own filthy air that it took action, though its emissions are still rising.

Last week in Dublin, Legal & General Investment Management delivered an astonishing warning about the risk we face if failing to tackle the issue

It’s no wonder then that the lead in this emergency is more and more coming from companies rather than governments. As the US formally sat out this week’s UN climate summit, the bosses of the biggest and most well-known US brands – Apple, Google, Microsoft, Tesla, Total, Pepsi, Coca Cola – wrote an open letter to the White House administration, calling on it to stay in Paris climate pact, which Trump has vowed to leave. “Humanity has never faced a greater or more urgent threat than climate change,” Apple chief executive Tim Cook tweeted.

At the same time, the European Investment Bank (EIB), the world’s largest development bank, has promised to totally phase out funding for fossil fuel projects within two years, potentially freeing up $1 trillion to invest in renewable energy schemes.

Last week in Dublin, Legal & General Investment Management (LGIM), one of the world’s largest fund managers with more than £1.1 trillion in assets, delivered what can only be described as an astonishing warning about the risk we face if failing to tackle the issue.

It said that even on the basis of several “optimistic assumptions” around the adoption of renewables and the switch to electric vehicles, we’re still on course to experience global warming of between 3.5 and 4 degrees by 2100.

This, it said, would leave parts of the world exposed to a combination of heat and humidity that is consistent with human life expectancy of just six hours. This from a money manager embedded in the current global financial system.

With more than $11 trillion invested in the energy sector and many governments dependent on the rents they extract from domestic fossil industries, this is going to involve a “really disruptive, potentially traumatic series of changes that we as investors need to get our heads around”, LGIM’s head of commodity research Nick Stansbury said.

US billionaire and possible presidential hopeful Michael Bloomberg, meanwhile, has been spearheading a campaign to end coal burning in the US, spending $164 million on the campaign since 2010, during which time more than half the US’s coal-fired power plants have been closed.

He has repeatedly argued that the mass closure of coal plants in the US did not result from government action but from civil-society advocacy building on the falling costs of renewable energy. Are these grounds for optimism? Maybe not just yet, but the message around climate change has fought its way to the top of the corporate agenda.