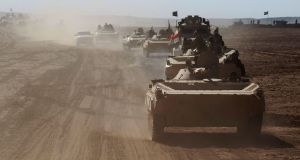 Iraqi forces’ BMP-1 infantry fighting vehicles, supported by the Hashed al-Shaabi (Popular Mobilisation) paramilitaries, advance towards the village of Sheikh Younis, south of Mosul, on Sunday, after the offensive to retake the western side of the city from Islamic State began. Photograph: Ahmad Al-Rubaye/AFP/Getty Images

Iraqi forces have launched a long-awaited offensive to retake west Mosul, making cautious advances towards the city’s airport ahead of a push into heavily populated residential areas, where up to 3,000 Islamic State fighters have vowed to defend their last urban stronghold in Iraq.

An estimated 650,000 civilians are trapped in the west of the city, and the UN said on Sunday that many people were “at extreme risk”, with fuel and food supplies dwindling and drinking water and electricity scarce.

Plumes of smoke were seen as US air strikes supported the early advance, which met limited resistance as forces probed areas of south and southwest Mosul. More dogged clashes are expected when troops near the urban centre, which is known to have been fortified by members of Islamic State’s elite fighting units.

Senior officers said the battle was likely to take at least as long as the grinding fight for the east of the city, which began in mid-October and ended in January when battered forces reached the Euphrates river, which bisects east and west.

Air strikes and acts of sabotage have destroyed four of the five bridges across the river, with the last remaining bridge able to be crossed only on foot. Islamic State gunmen have shot at anyone who has tried to make the journey in recent weeks, making the crossing all but impossible.

Iraq’s prime minister, Haidar al-Abadi, announced the launch of the west Mosul offensive early on Sunday, minutes before up to 30,000 Iraqi police and soldiers began the operation. He asked the Iraqi armed forces to respect human rights during the battle and to take care of those displaced by the fighting.

Iraqi officials believe more residents of western Mosul are ideologically aligned with the terror group than in the east. The extremists are known to have prepared an extensive network of ambush points in the area’s narrow streets and alleys. But senior Isis members have fled the city in recent weeks, with some melting back into Anbar province and others making for the Syrian border, where they have joined other senior officials in villages to the south of Raqqa.

“We are doing everything we can to reach and help people,” said the UN humanitarian coordinator for Iraq, Lise Grande. “Mosul is an enormous operation. Each day, partners are trucking 2.3m litres of water to nearly half of all retaken neighbourhoods, supplementing municipal supplies,” said Ms Grande. “Frontline partners have delivered emergency packages of food, water and essential supplies to 878,000 people since Mosul aid operations began.”

The expected influx will be housed in three locations to the city’s south and southwest, where shelter for up to 150,000 people is being prepared. Aid organisations have been told to bunker down through what remains of the winter and to be prepared for operations well into the spring.

Major Raad, of the Iraqi special operations forces, said: “The refugees will go to Jeda and Qayyarah and many places are being prepared for them there.” He said his troops would not receive orders to move until Mosul airport was taken. The airport would be used as a staging base for the main battle, and the seizing of five villages on Sunday had put the operation ahead of schedule, he said.

The officer leading the operation, Gen Abdul Wahab al-Saade, said: “Iraqi army and police are controlling this. We will send the special forces in later. I think this may be shorter than the last fight [eastern Mosul\/, because a lot of them [Isis] have been killed and morale for them is down now. We are expecting surprises from them, but we have many plans to counter whatever they come up with.”

There are fears that the extremists may resort to the use of chemical weapons as the fight for the city progresses. The group is known to possess mustard gas, which it has used against Kurdish forces up to 20 times, so far with limited effect. Technicians working for Isis have also worked on a rudimentary weapons programme using chlorine and other chemicals.

Isis leaders are understood to have retreated to a narrow area on either side of the Iraqi/Syrian border, which includes the Iraqi towns of Billij, Baaj and Bukamal, as well as Shedada inside Syria. The Isis leader, Abu Bakr al-Baghdadi, is widely believed to move within this area.

US officials believe that the group’s senior members have gradually left the other stronghold of Raqqa, trickling into the desert.

As the so-called caliphate has shrunk, Isis had switched its focus to exporting terror to Europe and beyond. Western officials believe its capacity to co-ordinate repeat terror spectaculars like those seen in Baghdad, Brussels, Paris and Nice will gradually ebb as the group is militarily defeated. Senior regional leaders have warned, however, that without a meaningful political process Isis will remain a viable threat well beyond the end of the ground war.