Brexit: May faces no confidence vote after historic defeat

British Labour leader Jeremy Corbyn tables a motion of no confidence in the UK government as Theresa May's Brexit deal is defeated by 230 votes in the House of Commons. 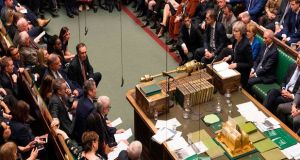 British prime minister Theresa May at the dispatch box in the House of Commons where she failed to carry the contentious Brexit deal. Photograph: AFP/Getty Images

British prime minister Theresa May faces a vote of no confidence in her government on Wednesday after suffering a historically unprecedented defeat for her Brexit deal. Labour leader Jeremy Corbyn tabled the motion after MPs rejected Mrs May’s withdrawal agreement with the EU by 432 to 202, a majority of 230.

The prime minister promised to work with parliamentarians from across the House of Commons to identify what was necessary to secure a majority. But she reminded MPs that any proposal must be capable of being negotiated with the European Union, which has ruled out any changes to the text of the withdrawal agreement.

“The government will approach these meetings in a constructive spirit, but given the urgent need to make progress, we must focus on ideas that are genuinely negotiable and have sufficient support in this House,” she said.

“If these meetings yield such ideas, the government will then explore them with the European Union.”

MPs will debate the no confidence motion after prime minister’s questions on Wednesday afternoon, with a vote expected soon after 7pm. The prime minister looks set to win the vote after the DUP and Conservative Brexiteers said they would support the government. If the government loses the vote, a general election will be called unless within 14 calendar days the government regains the confidence of MPs or an alternative government is formed.

European Commission president Jean-Claude Juncker expressed regret at the outcome of the vote and urged Britain to clarify its intentions as soon as possible. European Council president Donald Tusk said the EU would continue the process of ratification for the Brexit deal regardless of the Westminster vote.

“We will continue our preparations for all outcomes, including a no-deal scenario. The risk of a disorderly exit has increased with this vote, and while we do not want this to happen, we will be prepared for it. We will continue the EU’s process of ratification of the agreement reached with the UK government. This agreement is and remains the best and only way to ensure an orderly withdrawal of the United Kingdom from theEuropean Union,” he said.

More than a third of the 317 Conservative MPs voted against the Brexit deal with many citing the Northern Ireland backstop as their primary concern. The DUP’s 10 MPs voted against the deal, along with all but three Labour MPs and all SNP, Liberal Democrat and Plaid Cymru MPs. North Down’s Sylvia Herman was one of three Independents to back the deal.

Describing the vote as “a catastrophic defeat” for the government, Mr Corbyn accused the prime minister of ignoring the voices of business, trade unions and the opposition throughout the Brexit process.

“In the last two years, she has only had one priority: the Conservative Party. Her governing principle of delay and denial has reached the end of the line. She cannot seriously believe that after two years of failure, she is capable of negotiating a good deal for the people of this country. On the most important issue facing us, this government has lost the confidence of this House and this country,” he said.

Following an amendment approved by MPs last week, the prime minister must return to the House by next Monday with a motion outlining how she plans to proceed with Brexit. The scale of Tuesday night’s defeat suggests that modest changes to the Brexit deal will not be enough to secure a majority.

A cross-party group pressing for a softer Brexit has published a Bill that would allow MPs to put proposals to a vote without the backing of the government.