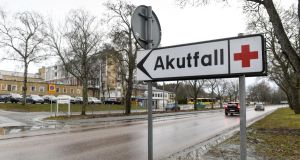 The patient was first admitted to hospital in Enköping, Sweden and is now being treated now in Uppsala University Hospital. The emergency room in Enköping has now been closed, and staff who came in contact with the patient are being cared for, a statement said Photograph: Fredrik Sandberg/AFP/Getty

A man is being treated in isolation at Sweden’s Uppsala University Hospital on suspicion of infection with Ebola after visiting Burundi, the regional authority said on Friday.

The hospital’s chief medical officer said the young man had been in Burundi for around three weeks, and was exhibiting classic symptoms of haemorrhagic fever, including vomiting blood. Test results were expected later on Friday.

Symptoms of the highly contagious and often deadly virus can take up to three weeks to appear.

The emergency clinic in the Swedish town of Enköping, where the patient was first admitted, was closed and staff who had been in contact with him were being looked after.

There is no known Ebola outbreak in Burundi, but it borders the Democratic Republic of Congo, which has been fighting an outbreak for almost six months. The disease has killed 356 of the 585 people known to have been infected.

The epidemic in a volatile part of Congo is the second worst ever, according to the World Health Organization.