Moscow warns disputes over church property could cause bloodshed 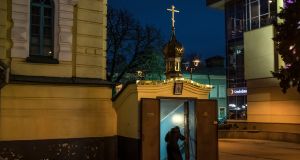 A worshiper enters the basement of the Church of the Archangel Michael in Rivne, Ukraine, where the Moscow-led Orthodox branch holds services. Photograph: Brendan Hoffman/New York Times

The new Ukrainian Orthodox Church expects to receive formal recognition this weekend of its independence from Moscow, despite fierce opposition from Russian political and religious leaders who warn that it could cause bloodshed.

Bartholomew, the ecumenical patriarch of Constantinople, agreed to grant independence to Ukraine’s church last year and decreed an end to more than 330 years of Russian control over the country’s religious affairs.

The Russian Orthodox Church accused him of causing a schism and broke off relations, and declared that it would no longer acknowledge the Istanbul-based Patriarchate as “first among equals” in the Orthodox world.

Bishops of the Kiev Patriarchate and Ukrainian Autocephalous Orthodox Church formed the new national church last month and chose Metropolitan Epifaniy to be its leader, at a unification council in Kiev that was boycotted by most clerics from the country’s Moscow Patriarchate, which remains loyal to the Russian church.

Ukrainian president Petro Poroshenko says the church is a vital element in his country’s fight to end centuries of Russian domination, and he will attend events in Istanbul this weekend to bless its creation and independence from Moscow.

On Saturday, Epifaniy and Bartholomew will hold prayers at St George’s Cathedral in Istanbul, before the Ecumenical Patriarchate signs the so-called tomos of autocephaly that bestows independence on the Ukrainian church.

On Sunday, the feast of the Epiphany, the two clerics will hold a joint Mass and then Bartholomew will formally hand over the tomos to Epifaniy.

It will be a joyous moment for many Ukrainians who, since their nation pivoted west in a 2014 revolution, have seen Russia annex Crimea and foment a war in eastern Ukraine that has killed more than 10,300 people and displaced 1.6 million.

The Moscow Patriarchate, which is thought to have more parishes but fewer followers in Ukraine than the new church, remains staunchly opposed to the move, as do Russian president Vladimir Putin and the Russian Orthodox Church.

Mr Putin recently derided Ukraine’s allegiance to the “Turkish patriarchate” and accused Bartholomew of pursuing money and power in Ukraine; he also suggested that US geopolitical ambitions and Mr Poroshenko’s bid for re-election in March were other key drivers behind Kiev’s bid for church independence.

“What worries me most is that a redistribution of [church] property will begin. Effectively, it is already happening. It could get very difficult and even bloody. God forbid that it comes to that,” he added.

For months now, Russian politicians, clerics and pro-Moscow figures in Ukraine have warned that Ukrainian nationalists will try to seize monasteries now held by the Moscow Patriarchate; at the same time, supporters of the new Ukrainian church claim Russia may stage such attacks to provide a pretext for retaliation.

Vadim Novinsky, a billionaire and prominent pro-Russian deputy in Ukraine, accused Mr Poroshenko’s administration this week of covertly trying to force the Moscow Patriarchate out of the historic Kiev Lavra and Pochayiv Lavra monasteries.

He urged Ukrainian deputies and foreign envoys to stop this, and prevent Ukraine plunging into the “abyss of an artificially created inter-Orthodox conflict”.

Mr Poroshenko insists that the Moscow Patriarchate will be free to operate in Ukraine alongside the new national church, but its clerics complain of a campaign of harassment by the security services in recent months.

If Bartholomew gave his blessing to the new Ukrainian church, however, Kirill warned that he would “forever lose the chance to serve the unity of the holy churches of God, cease to be pre-eminent in the Orthodox world . . . and the suffering you have inflicted on Orthodox Ukrainians will pursue you to the Last Judgment.”