Swimmer dies after being rescued from Dublin Bay 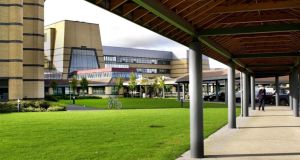 A swimmer left fighting for his life after he was pulled from Dublin Bay has died in hospital.

The alarm was raised at about 11.20am yesterday when the 35-year-old went swimming off Dalkey Island and did not return.

A major search operation was launched and the Garda Water Unit pulled the man from the sea south of Sorrento Terrace.

The man was airlifted to Tallaght Hospital, where he later died.

RNLI lifeboats from Dun Laoghaire, a coast guard unit and the coast guard rescue helicopter were also involved in the operation. – PA

Exporters from US experienced dismal sales to China last year 10:26
UCD students protest over accomodation price hike 10:22
Coronavirus: More than 80 per cent of cases have been mild 10:18
Fine Gael’s plan for opposition a sign of ‘humility’, says Coveney 10:15
HSBC to slash 35,000 staff in dramatic overhaul 10:13