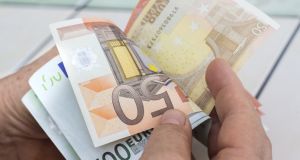 All moneylending services should have to carry warnings about the high costs of loan repayments on any advertisements, the Society of St Vincent de Paul (SVP) has told the Government.

Similar to packaging introduced for tobacco carrying health warnings, any moneylending advertisements or literature should include a clear warning of the high cost of the loan, according to an SVP submission made to the Department of Finance.

The charity suggested messaging such as “Warning: This is a high cost loan,” be placed on moneylender advertisements.

SVP, which supports people in poverty and homelessness, has consistently called for more regulation of moneylender services in recent years.

The charity said an estimated 330,000 people use moneylenders in Ireland.

In the charity’s submission to department officials, it called for a statutory maximum cost of credit which can be charged by a moneylender. The State could introduce an interest rate cap on loans, the submission said.

Currently moneylenders must provide information on the high-cost nature of loans to prospective customers, under Central Bank rules. But this is typically laid out in the moneylending agreement signed by the customer, and not required to be included in advertisements.

“Other measures should include better access to sources of low cost credit for low income households, enforcement of the Consumer Protection Code for Moneylenders, and better protection of customers of moneylenders, including better information, financial education and more inclusive mainstream banking services,” she said.

Kieran Stafford, SVP president, said charity volunteers routinely came across moneylenders giving loans to vulnerable households, who did not have the capacity to repay the loan.

“People tend to use moneylenders when they have limited access to other sources of credit and they may be worried about cutting themselves off from this source of credit by reporting abuses within the sector,” he said.

Households on low incomes may have poor credit ratings, which limits where they can access loans from, Mr Stafford said.

“Repaying a high cost loan is a very heavy burden for households that are struggling and can lock them into a cycle of debt and poverty,” he said.

“Moneylenders tend to engage in heavy advertising at times when low income households are under financial pressure, for example back to school and Christmas, and it is important that customers know at first glance that the adverts they are seeing are for high cost credit,” Mr Stafford said.

1 Man unidentified in psychiatric hospital for 30 years may have DNA taken
2 Miriam Lord: Another dog’s dinner as D’Arcy jumps on the gravy train
3 The far right rises: Its growth as a political force in Ireland
4 Economic slump less serious than feared but jobs crisis looms
5 US election: Everything you need to know about Tuesday’s presidential debate
Real news has value SUBSCRIBE