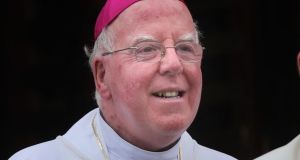 Despite announcing his resignation earlier this month Dr John McAreavey remains on as Bishop of Dromore until his standing down is accepted by Pope Francis. This has yet to happen.

When it does, the Dromore diocese college of consultors will then meet and, in accordance with its rights and duties under canon law, elect a diocesan administrator who will take charge of affairs until a new bishop is appointed.

A spokesman for the Catholic bishops confirmed that Bishop McAreavey’s resignation has yet to be accepted by the pope and that until then he remains Bishop of Dromore under canon law.

Bishop McAreavey, a noted canon lawyer, announced his resignation on March 1st through Arthur J Downey and Company solicitors in Banbridge, Co Down. It is understood this was done without advance consultation with Rome or the Irish Episcopal Conference.

On March 3rd, in a letter to the people, priests and religious of Dromore diocese, the bishop announced his resignation “with a heavy heart” and “following recent media coverage which has disturbed and upset many people”.

This was a reference to media reports, particularly on BBC Northern Ireland’s Spotlight programme, which raised serious questions about the bishop’s handling of clerical child sex abuse allegations made against the late Fr Malachy Finnegan, former president of St Colman’s College, Newry, and later parish priest at Clonduff/Hilltown near Newry.