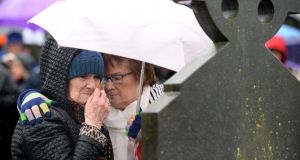 The grandson of a woman incarcerated in a Magdalene laundry has spoken of his family’s pride as he attended an emotional commemoration in Dublin.

Frank Brehany, from Wales, discovered his family’s “deep secret” after promising his late father he would find his mother.

From the 18th century up to the mid-1990s, tens of thousands of women were put to work in laundries run by Catholic orders of nuns. Unmarried mothers and girls from troubled backgrounds suffered years of abuse inside the grim facilities.

On Sunday, Mr Brehany attended a memorial event at Glasnevin Cemetery to commemorate the women who died inside the laundries. He embraced 88-year-old Mary Merritt, who says his grandmother looked after her during her 14 years in the laundry.

“I am deeply moved and privileged to be standing here in the company of giants – it’s a cliche but it’s a true cliche,” Mr Brehany said. “My journey started in 2010 to uncover the secret, the deep secret of my family. Before my father died I promised I would find his family, that I would find his mother.

“The other part of that promise is, I would find justice for my family, justice for Mary and I am delighted to be able to tell you that I am luckier than most because my father had a birth certificate and, as a result of that, I have not only found my family history going back to the late 1700s, but I have surviving family in the Irish Republic, in Northern Ireland, in London, in Connecticut, in Chicago.

Ms Merritt gave thanks that Ireland had been transformed since the days of the laundries.

“I am 88 years of age now and I hope to be able to come every year until I am 100 or more to pay my respects to the Magdalene women, because I love each and every one of them, and I love all of you who come here and pay respects to them,” she said.

“It’s a great day for Ireland that it’s all changed.” – Press Association