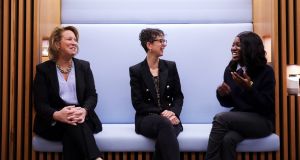 An initiative called Inspiring Women is seeking 1,000 female professionals to speak with school students from disadvantaged areas as part of efforts to address the gender gap in some roles.

The campaign aims to give young school students from disadvantaged areas a chance to hear from successful female role models working in a broad variety of roles and industries.

It is seeking 1,000 successful female professionals to spend one hour speaking to school children about their career, the challenges and opportunities they’ve encountered, and how best for young people to achieve their “dream profession”.

Some 250 schoolgirls attended the event at the Foundry in Google’s Dublin offices, where they heard from 25 female leaders in business, education, science and the arts.

A report by the Organisation for Economic Co-operation and Development has suggested there is a particular need to increase the number of interactions between young women and successful female professionals working in a wide variety of jobs.

The study gives an example of girls trailing boys in mathematics tests due to reported lower levels of self-confidence and higher anxiety in approaching the subject.

However this gender gap in performance disappears when self-confidence and anxiety levels are equal, suggesting a clear need to build girls’ self-confidence not only in mathematics but other subjects and extracurricular life in general.

Minister for Children & Youth Affairs Katherine Zappone, was the keynote speaker, said it was “vitally important” for young girls who are considering any career to have female role models in their chosen fields.

“Representation is key to success,” she said. “You need to be able to see yourself in those roles you are aspiring towards.

“I believe this can be achieved through building such relationships as we are here to establish and create positive networks between young women and professional female role models as envisioned by the Inspiring Women programme.

“That is what this network can and will provide – it can show all of us what is possible as we hear from women who are succeeding and exceeding their own expectations in the workplace.”

“By meeting leading professional females, it is hoped that career success is not an abstract notion to young girls, but instead something that is very much achievable with the right mindset,” she said.

Patty Clement, EU chief operating officer at Bank of America Merrill Lynch, said the bank was “steadfast in bringing forward conversations about gender, race and social equality to the business”.

“We are guided by our ambition to be part of a broader solution for social mobility, which forms a vital part of our responsible growth strategy,” she said.

“We believe through education and mentoring students will be motivated to realise their ambition and look forward to encouraging female professionals to join this progressive and exciting programme.”