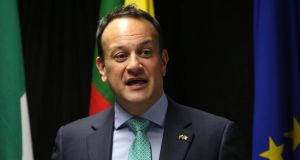 Taoiseach Leo Varadkar said there was an ‘epidemic of violence against women’ which ‘needs to stop’. Photograph: Colin Keegan/Collins

Mobile health units to assess victims of sexual assault are to be rolled out as part of a series of new initiatives agreed by the Cabinet.

The Government held a special Cabinet meeting on Friday to discuss gender equality on International Women’s Day and discussed six items including the ratification of the Istanbul Convention.

Although the Government signed the Istanbul Convention in November 2015, it has taken over three years to put the legislative framework in place to enable ratification.

Commenting on the ratification, the Taoiseach Leo Varadkar said there was an “epidemic of violence against women” which “needs to stop”.

“We know the names of many of the women who have had violence perpetrated against them and the ratification of the Istanbul Convention is a very important part of that.”

A number of other key measures were agreed by Government, including plans brought forward by the Minister for Health Simon Harris to help victims of sexual assault who cannot travel for assessment.

Minister for Social Protection Regina Doherty said: “Mr Harris brought a memo with regard to our sexual assault units and making them mobile.

“I think we have heard so often in the past women’s stories about having to travel. I think the announcement that the units are going to travel to the women is very welcome.”

After the meeting, the Taoiseach also indicated future changes to the local election quotas.

“The way political party funding is calculated requires that at least 30 per cent of your candidates going forward for a general election must be female, and if not you lose State funding.

“That does not apply to local and European elections. I can see us in the future changing that, but in the meantime what we have decided to do is to provide additional funding to political parties that meet the 30 per cent target for the local elections so essentially we are doing it in a roundabout way but that funding has to be ring-fenced for equality and diversity and promoting that in politics.

“The carrot rather than the stick, on this occasion,” Mr Varadkar said.

The Government also agreed to the text of the Gender Pay Gap Information Bill to force larger companies to reveal the difference between what men and women are being paid.

Following the Cabinet meeting, Women’s Aid, which supports women and girls experiencing abuse in Ireland, said the Government must now “step up” fully to the commitments made in ratifying the convention.

Director Margaret Martin said “the ratification of the Istanbul Convention is a major milestone in tackling domestic, sexual and gender based violence. At the heart of any progress there must be the increased safety and protection for women and children affected by domestic violence.

“Only effective implementation, including resourcing, will make a very real difference. It is worth remembering that one in five women experience some form of domestic abuse in Ireland and our 24-hour national helpline responds to 50 calls a day.”