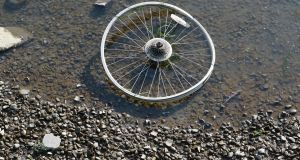 A spectacular improvement in the cleanliness of towns and cities over the past 17 years has not been mirrored on the State’s beaches and waterways, the Irish Business Against Litter group (Ibal) has said.

The group, which began conducting litter studies in towns and cities in 2002, has published its second annual survey of beaches and waterways, with only a sixth of the 42 locations examined deemed to be clean.

The Tolka river, where it is crossed by the Annesley Bridge in Fairview, Dublin, was one of three sites found to be “heavily littered”. The other two were Cork harbour at Ballinacurra, Midleton, and the river Barrow in Carlow town.

The survey, by the environmental education unit of An Taisce, found more than a dozen tyres dumped along the Tolka river, as well as bicycles, a shopping trolley and child’s tricycle.

In the river Barrow at Carlow it found “a wide variety of regular litter, both land and water based”; while in Ballinacurra there were “heavy levels of land-based food-related items and large numbers of traffic cones and household appliances discarded in the water”.

The most common forms of litter found were food wrappers, plastic bottles, cans and cigarette butts.

Once again, Salthill in Galway emerged as one of the cleanest beaches, alongside Curracloe in Co Wexford, and Seapoint in south Dublin. The report praised Salthill as a “well used and cared for environment” and that a previous issue around dog fouling had been successfully tackled. There was “a virtual absence of litter” at Curracloe beach, while Lough Rea was “an excellent site in terms of litter and overall presentation. The water was spotless”.

Locations found to be “moderately littered” included the beaches at Ballybunion in Co Kerry, Bundoran in Co Donegal and Brittas Bay in Co Wicklow.

Previously a litter blackspot, the pier at Doolin, Co Clare, was also found to be “moderately littered”.

Twenty-nine of the locations surveyed fell into this category, including Skerries, Portmarnock, Dún Laoghaire and the Grand Canal Dock, all in Dublin. The Avoca river at Arklow, Co Wicklow, Cork harbour at Blackrock and Balbriggan beach and harbour in Co Dublin were all found to be “littered”.

“Our regular surveys consistently show 80 per cent of our towns to be clean,” said Ibal spokesman Conor Horgan. “We cannot say the same for our beaches and waterways.”

While Ibal was focused on business and tourism, the discarding of rubbish into our waterways was also a broader issue, he said.

“The litter we encounter in these areas will typically enter our seas and add to the problem of marine litter, which is threatening our very survival.”

The need for action around plastic pollution in the marine and aquatic environment was well established, he said.

“Litter can readily wind its way to the sea irrespective of where it is dropped. When it comes to marine litter, the sea starts at every household, street, green space and workplace.”