‘Loads of children in my school had family members murdered’

Troubles 50: Young people open up about the trauma their families have experienced 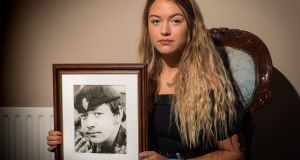 Zara Ferguson holding a photograph of her late uncle Alan, killed by the IRA in 1978. Photograph: Ronan McGrade/Pacemaker Press

The generation of children born in Northern Ireland in the 1990s was heralded as the first of a new era. They were either born after the Belfast Agreement or else were young children when it was signed; with them was born the hope that they could live free of the violence that their parents and grandparents knew and instead live what by then was a strange and unfamiliar concept in Northern Ireland after decades of terror: normal childhoods.

However, while this has proven true for many of Northern Ireland’s post-conflict generation, for others a clean break from the past has not been so simple. In families where the Troubles hit hardest and most devastatingly, some have inherited and continue to navigate the trauma of conflict-related murders despite them occurring before they were born.

Zara Ferguson (21) was born in the same year that the Belfast Agreement was signed. She is now an engineering student at the University of Liverpool, but she spent a quiet childhood in a farmhouse near Derrygonnelly in rural Co Fermanagh. She recalls how as a small child, she started to realise her family was different from her neighbours and school friends. On visits to her grandmother’s home, she was asked to help polish photo frames containing family portraits and casually inquired about the identity of a man she didn’t recognise. Her grandmother’s response surprised her: “She had this eerie silence about it that, when she spoke, you just listened and it was heartbreaking.”

Zara learned that her uncle, Alan Ferguson, a part-time member of the Ulster Defence Regiment, had been murdered by the IRA in a 1978 attack on his patrol when he was just 22. No one has ever been prosecuted for the attack.

She still struggles to comprehend the enormity of what happened and the suffering it inflicted on her grandmother: “Because we’re a very weird society in Northern Ireland, you can very easily forget what she’s been through and then you just remember and its astounding, it’s unnatural.”

Zara attends a memorial service every year to commemorate Alan’s life and often discusses him with her parents. Her father, Alan’s brother, has particularly fond memories of him and is keen for his memory to live on.

However, she says honouring her uncle’s memory has not always been easy. She recalls the shock and disgust she felt when, aged 17 and on a bus to a local nightclub with a mixed group of Protestant and Catholic teenagers, some began singing a pro-IRA song: “You look back on it now and it’s like, why didn’t I just get off the bus? But you just have to kind of put your head down and forget about it. Then you feel a bit sick about it afterwards when you think, maybe I should have said something. What have I got to be ashamed of? They’re the ones who should be ashamed, singing an IRA song. I wouldn’t go into America and sing about the Taliban but somehow I’m ashamed in my own country for being in their way when they’re singing their songs.”

Zara worries that many young people in the post-conflict generation, including young unionists, can view the Troubles in a way that paints Republicans romantically while unfairly castigating the British army: “There’s been a massive rewriting of history. I think with my generation it’s very easy to follow sheep. What’s popular at the minute is to follow a very left-wing [ideology] and look at it with rose-tinted glasses.

“Especially in my side of the community, the Protestant side, they’re very ashamed about what happened and just don’t want to talk about it … But at the end of the day, [the IRA] was an illegal terrorist organisation.”

She says that while attending the local Protestant secondary school, many of her classmates couldn’t understand the strength of her feelings about the Troubles: “I was always singled out, like, ‘Oh, Zara’s very staunch, she’s very conservative, she can’t let things go’, but it isn’t that I can’t let things go. It’s that I’m acknowledging my history and my identity. I’m not ashamed of it.”

Michael Hayes (29), a youth worker in north Belfast, has little knowledge of his grandfather, after whom he was named. “Basically what I know is he was just walking home from a night out and got shot by a Brit,” he says. His grandfather was shot dead by a soldier in 1972 in New Lodge, a predominantly nationalist and Republican area of north Belfast. The 27-year-old was married and had two young sons.

He says he never discussed his grandfather’s death with his grandmother, who still lives in the New Lodge: “My granny has never spoken to me about it and I just don’t ask her. It probably still hurts her. I would never talk to my granny [about it] because I wouldn’t want to upset her.”

Instead Michael has pieced together bits of information from his grandfather’s Mass card, which is still kept in the family home, as well as in quiet trips to the graveyard on his anniversary. Recently he has also begun attending protests along with other victims’ families, some of whom are calling for soldiers to face fresh investigations into Troubles-related killings amid allegations they were not all fully and fairly investigated at the time.

He says that in north Belfast, which had some of the highest murder rates throughout the conflict, his family’s trauma was far from unusual and he grew up knowing many others dealing with similar unspoken griefs: “Loads of children in my school had family members murdered. There was always someone else in the class at school who had had something similar happen. Everyone you meet knows someone who was involved in [the conflict], or affected by it.”

No one was prosecuted for his grandfather’s death, and Michael says that, almost 50 years on, his family are still trying to obtain an apology from the ministry of defence: “They don’t want to admit to responsibility. To them, it’s just another court case against another British soldier, which they don’t want.”

Current discourse within the British media, which presents investigations into unsolved Troubles deaths as a “witch hunt” against British soldiers, is deeply frustrating to him. “In England, I don’t think they have a clue what went on really. They don’t realise. My family just want an apology and they’re not getting it.”