Boy with autism ‘regressed’ due to refusal of school-bus place 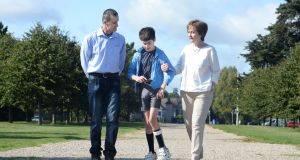 The refusal of a school-bus place to a boy with autism, cerebral palsy and a moderate learning disability goes against the spirit of legislation put in place to protect him, advocates have said.

This is due to the National Council for Special Education (NCSE) refusing him a bus place, according to his father, school principal and autism advocacy charity AsIAm.

His parents, Diane Payne and Dimitris Karagiorgis, had to fight last year to get him into the Marino special school in Bray, which they had identified as best meeting his needs.

By the end of last August, when Marino school still had no place for Christopher, the Department of Education and the officer employed by the NCSE, maintained their position that they recommended St Catherine’s.

A fortnight later, after the case was highlighted by AsIAm, a place became available in Marino. Principal Oonagh Kenny says Christopher has “adjusted well to his new school setting, for the most part”.

His one difficulty is that he has been refused a bus place. The NCSE rejected his application, saying he is “not attending the nearest recognised special school”, which is St Catherine’s.

The School Transport Appeal Board rejected an appeal on the same grounds. Mr Karagiorgis received the news three days after Ms Payne’s funeral. She died in April after a short battle with cancer, aged 52.

Mr Karagiorgis said Christopher had a school-bus place while at national school.

“It was the start and end of his day. It was his space with his peers. It gave him structure and predictability,” he said.

Ten other students attending Marino school, who live further south of Bray than Ashford, are provided with bus transport.

“There is space on the two buses which pass through Ashford,” says Mr Karagiorgis. “There would be no extra cost to pick up Christopher. It feels like he is being discriminated against.”

Mr Karagiorgis drops Christopher to school and he is collected in the afternoon by “different friends or childminders”.

“He sees his friends get the bus. At first he was crying, saying, ‘I want to go on the bus’. But he has stopped now. He has regressed. He has lost levels of socialisation and a level of independence. He was doing really well and now he has gone back.”

He is now taking the case to the Ombudsman for Children.

Ms Kenny, in a letter supporting him, said: “As a young teenager with a diagnosis of autism it is essential that Christopher should be afforded a predictable bus transport arrangement . . . This is an essential part of his independence and life-skill training as he prepares for adulthood.”

Adam Harris, chief executive of AsIAm, described as “incredibly cynical” the manner in which the department and the NCSE engaged with the family last year regarding Christopher’s school place and now his bus transport.

“It is a clear breach of the spirit of the EPSEN [Education for Persons with Special Educational Needs] Act 2004,” he says.

The department and the NCSE said they could not comment on an individual case.