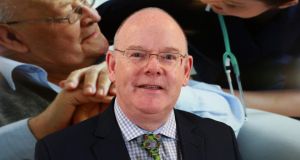 Phelim Quinn, chief executive of the Health Information and Quality Authority: “I don’t think we can actually even currently quantify the number of people in conventional homecare or domiciliary care, supported living, or those people in step-down units, because they’re not defined as care centres.” Photograph: Crispin Rodwell

After the programme, a Health Service Executive-commissioned report found there was a pattern of “institutional abuse” at the home, and that “the context within which this occurred was that of policy, legislation and regulations which have over many years failed to adequately articulate and address the complex needs of this most vulnerable and frail population of older Irish people”.

The verdict on Leas Cross was not just that the people who lived and died there were let down by their carers, they had also been let down by the system.

Arising from the scandal, the government set up the Health Information and Quality Authority (Hiqa). More than a decade later, and facing into a demographic pinch that will push Ireland’s elderly care systems harder than ever, Phelim Quinn, Hiqa’s chief executive, is positive about the role the agency has since played.

“I genuinely believe there’s demonstrable improvement in the standards of care in the older person’s sector,” he says.

Between 2009 and 2012, Hiqa closed 14 facilities. Another 18 closed voluntarily, often in the face of closer inspection, or the financial burden of compliance with demanding regulations.

Since then, Quinn argues the model of regulation has shifted to one that operates based on co-operation between the facility and the regulator. While Hiqa has the power to shut down a home, there is an emphasis on working with a provider to improve standards.

While the model of enforcement has attempted to move towards consensus, there are still significant issues at some nursing homes. According to a briefing note sent to Minister for Health Simon Harris in February, there are “ongoing challenges in relation to the physical premises of some centres”.

These failings, Hiqa chair Pat O’Mahoney warned Harris, mean that older people “experience care that is institutional in its approach and follows a medical rather than a social model of care”. People live in multioccupancy rooms “with little privacy and dignity” while “the needs of the service dictate when they can get out of bed and when they can eat a meal”.

He said daily lives were impacted by “living in fear of other residents due to peer-on-peer altercations, higher levels of restrictive practices and limited support to live as independently as possible”.

Since 2015, there has been an increase in the number of immediate or urgent judgments, one of the most serious compliance tools available to Hiqa. In 2016, 15 judgments were handed down to care homes. Last year, there were 29 judgments handed down, although the number of inspections also increased.

Many centres operate with “additional conditions” attached to their registration – infractions they are tasked with correcting, but not serious enough to warrant closure. Latest figures show that about one-fifth of care homes operate with such conditions attached.

Nonetheless, the overall number of seriously non-compliant services is low compared to the total number of nursing homes. There are 582 nursing homes caring for about 31,000 people in the State. In its most recent report, Hiqa found that “many providers are now striving to move beyond compliance with the minimum requirements of the regulations”.

While the picture is far from perfect, Hiqa seems happy with the direction the sector is going in. But there are still significant problems in some homes – and time may be running out for them to come up to scratch.

In 2016, the Government was faced with the very real possibility that significant numbers of nursing homes would fail to meet standards for the environment they provide, which were originally set down in 2007.

The response was to introduce a five-year grace period, after which nursing homes would be legally obliged to hit certain improvement targets. As revealed by a briefing note sent to Harris earlier this year, “it is now becoming apparent that agreed plans for particular centres are either not happening at all or are not advancing at the required pace”.

The briefing paper said there were seven centres that “owing to such poor regulatory compliance, the chief inspector is not in a position to renew their registration”. There were another 45 which told the inspectorate that they would not meet a 2021 deadline to improve their physical settings.

There is, it seems, a potential cliff edge facing the sector when this grace period ends, particularly when it comes to HSE facilities.

“In the main, our problem with environmental compliance is with the HSE,” Quinn says. The HSE has quietly raised the possibility that Hiqa should have “due regard” to the resources available to it when assessing its compliance. There is provision for this within the Health Act, but Quinn gives the idea the short shrift.

Hiqa has taken legal advice, and does not believe that section of the Act applies to the inspector of social services; when the grace period expires (he believes an extension would be “another fudge”), he intends to regulate HSE settings in exactly the same way as the private sector.

“If we were to apply compliance in a non-equitable way, we would in actual fact be applying a double standard; we don’t believe the legislation allows for that,” he says.

The nature of the care home sector is changing as well, according to Hiqa. Institutional investors, attracted by the steady, Government-backed revenue stream, are flooding in. While this means more beds at a time when the population is rapidly growing older, Quinn says there are also reasons to be wary of this consolidation, with the character of nursing homes changing.

“They’re moving away from that homely, person-centred type of service that has existed heretofore,” he adds. “That starts us thinking: is this about the reinstitutionalisation of care, within this private sector model? Larger providers, larger homes, more beds.”

Hiqa is looking at the potential risks of this trend. While still incomplete, its research has flagged pitfalls in other jurisdictions. One is the nature of care and that potential for institutionalisation.

They’re moving away from that homely, person-centred type of service that has existed heretofore

A second is the risk of failure; if many of the State’s nursing home beds are provided by a small number of operators and one of these firms collapses, as happened in the UK with Southern Cross and Four Seasons in recent years, it could be catastrophic. “Should they collapse from a financial perspective, it leaves the State vulnerable to take up the care of those people,” Quinn warns.

Under Sláintecare, the Government’s long-term strategy for healthcare, there will be an increased emphasis on care close to or in the home. But much of the care outside of nursing homes is, in effect, unregulated, leaving Quinn concerned about the options available to him.

“It needs to change and it needs to change quite significantly,” he says. The problem, as he sees it, is not his powers to regulate bricks-and-mortar nursing homes – it is care at home, which is largely provided under HSE homecare packages or through the private market, where there are “huge chunks” of the market outside the regulator’s field of vision.

“I don’t think we can actually even currently quantify the number of people in conventional homecare or domiciliary care, supported living, or those people in step-down units, because they’re not defined as care centres,” he says.

“There are vulnerabilities right across that spectrum, and we believe the Government needs to act to ensure they put safeguards in there.”

In recent years, Hiqa asked the Government for a new regulatory envelope, based on the Welsh system, that covers not just nursing homes and similar environments. With the department working on a statutory scheme for the homecare sector, Quinn argues that updated regulations must be put in place as a priority. “That needs to start happening sooner rather than later.”

Hiqa is also concerned about the lack of safeguarding legislation which would apply for older people regardless of where they are cared for, or even if they are in care.

Such a broad policy backdrop exists for children, he says, but its absence leaves older people potentially exposed to emotional, financial, physical and sexual abuse.

Another area he will be monitoring is the provision of “optional extras” in care homes. These made headlines in recent years, with residents charged extra fees for Mass attendance or adult nappies. This prompted new guidelines on extras, drawn up by Hiqa and the Competition and Consumer Protection Commission. But if they don’t work, Quinn says there may be a need to strengthen the law.

“Should some of those errant behaviours continue to happen, there has to be some sort of change in the legislation that clearly articulates what it is an individual is paying for, and what constitutes optional extras or luxuries beyond that point,” he says.