Tusla chief Fred McBride to step down next month 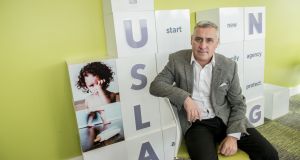 Fred McBride is to step down as the head of Tusla. File photograph: Brenda Fitzsimons/The Irish Times

The head of the Child and Family Agency, Tusla, Fred McBride, is to step down next month, it has been announced.

The agency’s board told staff on Thursday afternoon it had “with regret” accepted Mr McBride’s decision and thanked him “sincerely for his contribution to the organisation over the past five years”.

Mr McBride succeeded Gordon Jeyes at the helm of Tusla in 2016 and embarked on a process of organisation and modernisation at the then two-year-old agency, which had emerged out of HSE structures.

He steered it through a series of controversies, including about its handling of abuse allegations in foster care settings and its role in an alleged smear campaign against Garda whistleblower Maurice McCabe.

Deputy chair of the board, Rory O’Ferrall, said on Thursday: “While operating against a very challenging backdrop, it was widely recognised that Mr McBride and his team . . . presided over a period of considerable reform in which several important milestones have been reached in the advancement of child protection, welfare and support services for families in Ireland. ”

These included, Mr O’Ferrall said, the digitisation of all information and childcare files across the agency, in the National Child Care Information System (NCCIS), which was now live across all Tusla areas, and the development and rollout of a new national approach to practice in child welfare and protection known as Signs of Safety.

Mr McBride thanked the agency’s 4,000 staff for their work during his time there.

“I want to acknowledge the hardworking staff of Tusla and their unstinting commitment in the delivery of child and family support services nationally.

“I also want to thank the members of the Tusla board for their ongoing support of the entire management team throughout some very challenging periods of my tenure, and to acknowledge in particular the chair of the board, Norah Gibbons, at this time.”

Minister for Children and Youth Affairs Katherine Zappone wished Mr McBride well and thanked him for his work and commitment “during a time when the agency has developed significantly”.

“Many challenges remain for Tusla but with the ongoing energy of the dedicated workforce the positive progress of the organisation will continue,” she said.

Prior to that he was director of social work for Aberdeen City Council.