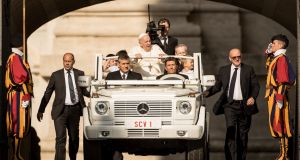 Pope Francis has said clerical sexual abuse scandals in the Irish church have contributed to a low number of vocations to the priesthood.

Speaking at his general audience in the Vatican on Wednesday, he said in his visit to Ireland at the weekend, as part of the World Meeting of Families, “there was great joy”, but also “pain and bitterness for the suffering caused in that country by various forms of abuse”.

He said there was faith in Ireland, and it had deep roots.

“But do you know something? There are few vocations to the priesthood,” he said. “Why does this faith not succeed? Because of these problems, the scandals, many things.”

He asked for prayers for new vocations in Ireland.

The pontiff also told those gathered in St Peter’s Square that ecclesiastical authorities in Ireland in the past have not always been able to address clerical sexual abuse crimes adequately. But Irish Bishops have “undertaken a serious path of purification and reconciliation with those who have suffered abuse, and with the help of national authorities they have established a series of strict rules to ensure the safety of young people”.

“In my meeting with the bishops, I encouraged them in their efforts to remedy the failures of the past with honesty and courage, trusting in the Lord’s promises and counting on the profound faith of the Irish people, to inaugurate a season of renewal of the Church in Ireland,” he said.

Referring to a meeting with survivors of abuse, which took place last Saturday, he said: “The meeting with some survivors left a profound mark on me; and on several occasions I have asked the Lord for forgiveness for these sins, for the scandal and the sense of betrayal they have caused.”