Less than 1 per cent of community in 3rd level education education, committee told 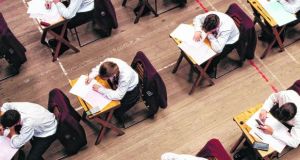 While 92 per cent of the general population in Ireland completed secondary school, the proportion in the Traveller community was just 13 per cent.

Children from the Traveller community are being channelled into unofficial “Traveller schools” in some parts of Ireland, the only ones that will accept them, an Oireachtas Committee has been told.

Some, it heard, are attempting to change their accents in a bid to avoid less favourable treatment.

The Irish Traveller Movement (ITM) said in some areas either no school at all or just one was actively supporting their inclusion.

“This school then informally becomes the school in the area that Travellers are directed to and becomes seen as ‘the Traveller school’,” it said.

The ITM views were outlined in a submission to Tuesday’s Oireachtas Education Committee examining the issue of Traveller participation at second and third level.

Through a number of such submissions, the Committee was reminded that historic prejudice, funding cuts and stigmas had all contrived to damage such participation.

For instance the ITM said that from the 1970s Traveller children were kept in segregated schools.

Elsewhere, it said, Travellers recalled “horrific stories of been washed when they came into school and having separate play times and lunch times to their settled counterparts”.

Cuts to services were also repeatedly raised - particularly 87 per cent reductions in 2011.

Figures highlighted to the committee by the National Traveller Women’s Forum said 67 per cent of Traveller children came from a home where their mother had no formal or primary education. It said while 92 per cent of the general population in Ireland completed secondary school, the proportion in the Traveller community was just 13 per cent.

There is, it said, less than 1 per cent of the community in third level education - just 167 adults with qualifications.

“An erosion of young Travellers identity is manifesting in many hiding their identity [OR]changing their accent, for fear of being treated less favourably by teaching staff and their fellow students and or fear of bullying, racism and discrimination,” Ms O’Callaghan said.

Pavee Point, the representative organisation, welcomed forthcoming changes to education law that will see Traveller culture and history reflected in the curriculum - its absence was also repeatedly raised with the committee.

In its submission, it said there was a need for affirmative action for more Travellers to become teachers.

“This is essential in promoting positive role models as well as influencing the culture and ethos of schools,” it said.