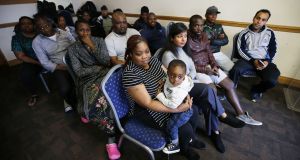 Residents at Clondalkin Towers had been told last year that the company managing the centre was pulling out in December 2018. Photograph: Nick Bradshaw for The Irish Times

The Clondalkin Towers direct provision centre in Dublin will remain open for at least another two years, the Department of Justice has confirmed.

Residents at the accommodation centre, which is one of two asylum centres in the capital, were told last year that the company managing the centre was pulling out in December 2018. The contract was subsequently extended “on humanitarian grounds” to summer 2019.

The department confirmed this week that the closure of the Dublin centre had been averted and, following the completion of mobilisation works, a contract would be signed for “a minimum of two years”.

A condition of the tender is that all residents will be able to cook meals of their own choice while families will have access to designated living areas where they can carry out normal family activities outside their bedrooms, said a department spokesman.

“The residents, because of this process, will enjoy greater autonomy and independence in the centre with the introduction of independent living and cooking facilities.”

The decision to keep the Clondalkin centre open follows news that Dublin’s Hatch Hall, which houses the other direct provision centre in the capital, is set to become a five-star hotel. The listed building has been used as an accommodation centre for more than a decade but is to be renovated by the company behind Ashford Castle.

There are 245 residents living in the Clondalkin accommodation centre which is contracted to house 225 people. These include 70 people who have been granted asylum but are unable to secure housing outside the centre.

More than 700 people nationwide are still living in direct provision centres despite receiving refugee status or permission to remain in the country.

The department says it is working with NGOs and the Department of Housing to provide support for those leaving direct provision to secure longer term housing and noted that funding had been granted to the Jesuit Refugee Service and the Peter McVerry Trust under the Asylum, Migration and Integration Fund 2017-2019. Funding has also been granted to the South Dublin County Partnership as part of a two-year housing and integration programme, according to the spokesman.

The department confirmed it had completed its assessment of tenders for new direct provision centres within a 40km radius of Newbridge and had begun a “drawdown process” in selecting suitable properties for accommodation centres.

Asked earlier this year if the department was moving accommodation centres out of Dublin for cost reasons, a spokesman said no Dublin hotels or premises had responded to a call for expressions of interest. UCD’s Dr Liam Thornton said a decision was made in 1999, when the direct provision system was first established, that centres should not be located in the capital city. “They felt locating centres in a capital would attract more people. Direct provision was never supposed to be in Dublin for fear of attracting asylum seekers.”