‘To survive the Irish school system, you have to become middle class’ 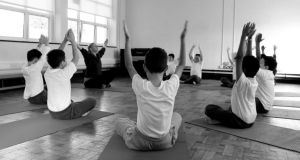 At Francis Street CBS primary school, in south inner-city Dublin, the work of narrowing the gap between disadvantaged pupils and their better-off peers starts not with maths or literacy but with yoga and Pilates.

The boys sit in a circle. There are exercises to develop fine and gross motor skills, which are vital for handwriting. They are encouraged to talk about empathy and how to deal with conflict. Mindfulness and meditation are also part of the approach.

It is, says the school’s principal, Fiona Collins, all about playing catch-up with other children. “They are often at a disadvantage the minute they are born. They lag behind on exposure to words and on motor skills and basic development. “The Pilates and yoga are really about making up for the fact that many missed out on a lot of early developmental milestones. This can often be linked to being in buggies for too long or growing up without sufficient space to run around and explore.”

There is also a big focus on teaching children to have better control over their emotions. “This kind of work can also help with issues around regulating the body and helping children to control their behaviour. Stress can also affect development of children, as they are in a fight-or-flight mode, which inhibits their learning and affects their behaviour.”

The flats and pockets of social housing in the south inner city are just a kilometre or two from Trinity College Dublin, yet it’s a route that crosses some of the deepest ravines of Ireland’s social divide.

If you’re a child attending some of the most disadvantaged schools in the capital, you’re likely to have significantly lower literacy and numeracy scores, there’s a higher chance you’ll drop out of school, and it’s unlikely you’ll go to college. Third-level progression rates in Dublin, for example, reach 99 per cent in the most affluent districts of the city but are as low as 20 per cent in the poorest.

Education may well have a unique capacity to break down cycles of disadvantage, but a gaping chasm remains. So what are we doing to narrow the gap, and is it working?

In 2006 the Department of Education introduced a targeted initiative to combat educational disadvantage. Under the Deis scheme, which aims to deliver equality of opportunity, about 900 schools are given additional teachers, to lower their pupil-teacher ratios, and literacy and numeracy supports, among other help.

But the gap still remains alarmingly wide. And most students from disadvantaged backgrounds do not even attend Deis schools and are therefore not benefiting from additional supports. A new evidence-based system was introduced recently to ensure the most deprived schools benefit, however, hundreds that require support still languish outside the system. Most experts agree a more graduated support based on a school's needs would be much fairer than a simple "in, out" system.

Schools, of course, can do only so much of the heavy lifting. Young people are also shaped by their families and social backgrounds. This, experts say, underlines the importance of early-intervention schemes that boost parenting skills and can dramatically improve children’s behaviour and achievement. But these projects are in only a dozen or so disadvantaged communities across the State.

Many educators also feel our highly academic education system, especially at post-primary level, is rigged against young people from disadvantaged communities. The points-obsessed system, they say, offers only a very narrow measure of their skills.

Have your say: Is class an issue in the Irish education system?

The transition to second level, in particular, is a time when many begin to really struggle. Dr Emer Smyth is the author of an influential ESRI report, published a decade ago, that revealed major problems in the engagement of students, especially in the second year of secondary school.

Two distinct groups emerged: while girls from middle-class backgrounds were highly engaged in school work, a second group – especially boys from working-class backgrounds – were switching off and disengaging. “We found that they didn’t see the subjects as relevant or the approach as engaging... The system assesses and rewards a narrow range of skills.”

Smyth’s more recent research also points to working-class boys as more likely to get caught up in a negative cycle of acting up and being reprimanded by teachers, which often culminates in early school leaving or underperformance.

It’s no surprise, she says, that so many who are placed in lower-achieving or ordinary-level streams go on to underachieve.

At Francis Street CBS there is frustration that teachers can do only so much for their pupils. Fiona Collins say they work on boosting children’s aspirations. It’s a child-centred approach that wraps the system around their needs. Then they enter second level.

“It becomes about points, and for many there’s no way they can survive – unless they have very motivated parents and unless they have some level of resilience and grit. We do a lot around raising children’s aspirations with a dream-management initiative: helping children to visualise a future and helping them map out a path to that future.

“But to survive the system you have to become more middle class – which is obscene, really, when you think of ourselves as an egalitarian society. Our kids are competing with those going to private schools or grinds and getting every advantage to secure more points to get into university. How do kids who don’t have those opportunities even begin to compete? The system is marginalising them.”

Dr Katriona O’Sullivan, a lecturer at Maynooth University, knows about educational disadvantage first-hand, and now examines the impact of educational disadvantage. “To many I am your average middle-class woman. I am also the daughter of two heroin addicts, I am a teen mum, having a baby at age 15, and I am an early school leaver,” she says.

O’Sullivan was able to return to education through an access scheme and navigating the “dark arts” of the system.

There are no easy solutions to bridging the education divide, but there are good places to start, she says. The Deis programme should involve more subject support, aspiration-building activities, internship and college-awareness programmes.

“It is not enough to ask schools that are already stretched in terms of time and resources to plan their own activities when we have a body of knowledge which shows what works and what doesn’t,” she says.

There should also be bigger points reductions for college entry for disadvantaged children and much greater incentives for third-level institutions to target marginalised groups.

Dr Emer Smyth says another approach could lie in building up a more vocational option at second level, which is the norm in many European countries, and boosting the standing of further education and apprenticeships.

“Our late industrialisation meant we never had wholesale industrialisation, and our apprenticeships were very focused on a narrow range of occupations, such as construction… When the recession hit, the bottom fell out of the sector, which has further undermined it. It means that further education and apprenticeships are still seen by many as second best to the cultural norm of higher education.”

Another key feature of what boosts performance, according to Smyth, is the quality of students’ relationships with teachers. “It really makes a difference,” she says. “It’s about moving away from reprimand and suspension and detention – it can form a very negative dynamic for working-class boys. It doesn’t mean anything goes, but a degree of respect must be there.”

Some of the recent changes to the junior cycle, which provide a broader assessment of students’ skills, a move towards common-level subjects and away from streaming, should also help.

The Department of Education and policymakers point out that work in addressing many of these issues is under way. The senior cycle at second level is being reviewed to help ensure the system is more engaging for all students, and plans to expand apprenticeships and traineeships could also see one in five school leavers choosing this as an option.

There is also a quiet satisfaction at a recent report by the Unicef, the UN children’s charity, which ranked Ireland second out of 41 wealthy nations in promoting educational equality between children.

But critics say investment in tackling disadvantage is spread too thinly among schools and that the Unicef report also found that many vulnerable groups, such as Travellers, homeless children and immigrants, are still in danger of being left behind.

For Fiona Collins, the Francis Street CBS principal, narrowing the gap in educational attainment means focusing on poverty, first and foremost. “That is the key issue. It’s lack of maternal education and role models. It’s making sure kids are fed, have nutrition, sleep, exposure to books… Poverty impacts on all that,” she says. “We also need a system that is geared to their needs and where they don’t move school from, say, junior infants to Leaving Cert, where there is good communication and a deep understanding of their needs.”

GET INVOLVED: TELL US ABOUT YOUR EXPERIENCES

How does school life influence privilege and poverty in today’s Ireland? The Irish Times invites readers to give their perspective.

We are interested in hearing the views of teachers, parents and people currently in education on these questions. Your response may be published in The Irish Times or on irishtimes.com.