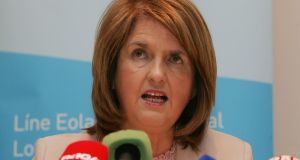 Joan Bruton: “We have to make sure students aren’t sacrificing their future for relatively or very low-paid employment while they’re in school.” Photograph: Alan Betson

The number of 16- and 17-year-olds in paid employment has increased more than 20 per cent in a three-year period.

Statistics released by the Department of Social Protection show that the number increased from just under 25,000 to 30,650 between 2015 and 2017, the most recent year for which statistics are available.

As the figures do not record children under the age of 16 working, who do not pay PRSI, the number of children in paid employment is likely to be even higher.

While the majority of the teenagers recorded were earning less than €5,000 a year, some were earning significantly more, suggesting that they were spending large amounts of time in the workforce at an age when most children are sitting or preparing to sit the Leaving Certificate.

According to the statistics, which were released to Labour Party TD Joan Burton in a parliamentary question, there were 93 children born in the years 2000 or 2001 who earned €20,000 or more in 2017.

Overall there were 111,319 people born in or after 1998 who had income taxed under PAYE in 2017, up from 92,198 in the same age bracket in 2015. While experts said demographic changes and the improving economy would account for some of the increase, educators raised concerns about the impact on the education of children who work long hours.

Clive Byrne, director of the National Association of Principals and Deputy Principals, said “if students are working serious hours, their studies will suffer and you’ll find educational progress will be affected”.

He said such students would be tired in the classroom, “they’d be distracted, they’d find it hard to concentrate, hard to keep up with their assignments. The school and the work at the senior cycle level would be a lower priority than it should be”.

Mr Byrne added: “Many of the students are working because of economic necessity … I’m sure they are working for a measure of financial independence, or there is a need within the families to do that.”

Ms Burton, the Labour TD for Dublin West, called on the government to convene a task force to examine the issue. Describing the rise in numbers as “very concerning and worrying”, she said some work can be a good experience for teenagers but that it should be outside term time.

“We have to make sure students aren’t sacrificing their future for relatively or very low-paid employment while they’re in school,” she said.

Paul Redmond, a research officer with the Economic and Social Research Institute (ESRI), said that part of the rise was likely caused by better job prospects outside of education as the recession ended.

He also argued that a positive trend in joblessness among young people, which was to be welcomed, could be driving the overall increase. “It is worth bearing in mind that youth unemployment has been very high in Ireland, especially during the economic downturn. This has been improving in recent years, so naturally this will be reflected in more young people at work,” he said.