Christy McCann to chair egm, despite ongoing inquiry over handling of a rape claim 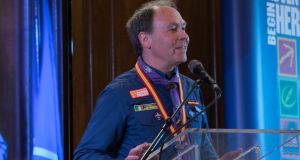 File photograph of Christy McCann. Senior sources described the Scouting Ireland board’s vote to reinstate him as a “total disaster” for the youth organisation.

The board of Scouting Ireland has voted to reinstate chief scout Christy McCann to chair the organisation’s upcoming extraordinary general meeting on governance reforms.

Mr McCann is one of four senior volunteers under investigation over the organisation’s handling of a rape allegation, and he stepped aside in April pending the findings of an ongoing barrister-led inquiry.

At a board meeting on Saturday, members voted for Mr McCann to chair the egm on October 6th. A second vote, to reinstate the other three volunteers under investigation – David Shalloo, Thérèse Bermingham and Ollie Kehoe – was defeated by a single vote.

The four were criticised in a confidential report by safeguarding expert Ian Elliott, which found the handling of an allegation in 2016, from a woman who claimed she was raped on a 2009 camping trip when she was 18-years-old, was “deeply flawed”.

The latest development comes as Minister for Children Katherine Zappone is considering whether to restore State grants to the organisation.

Funding worth €900,000 a year was suspended over the controversy, and in June Ms Zappone released an interim €220,000, following reform commitments. Her department were informed of the board vote on Tuesday.

Ms Zappone said Scouting Ireland officials had been warned she would “take a very dim view of any decisions that could be deemed to be a step back from the commitments given to improve the governance of the organisation”.

“I would find it very difficult to make a positive decision on restoration of funding if the current board of Scouting Ireland makes any decisions that call their commitment to robust governance into question,” she told The Irish Times.

The organisation’s members will vote to ratify an overhaul of their governance structures, adopted at a previous emergency conference, at the egm next week.

Mr McCann said he had been approached to chair the meeting following the board vote, and was “considering” whether to do so. He was “reluctant” to accept as he did not “want the wrong message going out”.

“It is important that the governance proposals get passed,” he said, adding he would consider chairing the meeting if the board felt it would assist the reforms being approved.

The Elliott report said Mr McCann’s decision to hold a meeting with the male volunteer accused of rape, while the man was suspended from Scouting Ireland over the claim, “demonstrated a blatant disregard” for safeguarding policy.

Senior sources described the board’s vote as a “total disaster” for the youth organisation. It is understood an attempt will be made to overturn the decision at another board meeting before the egm.

As part of reforms in June, the current board announced that its members would stand down, to be replaced by an entirely new board elected at the October meeting. However, at least five board members have refused to sign resignation letters, according to sources.

Those who have not done so include two of the volunteers under investigation, and three members who voted in favour of appointing Mr McCann to chair the upcoming egm.