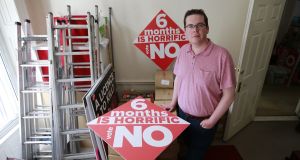 John McGuirk, communications director of the Save the 8th campaign. Photograph: Nic Bradshaw.

“We are here in Dublin with ProtectThe8th this morning. Pray for us! #warroomsessions”, said the Facebook posting by Fuzati, conveying something of a mixture of giddy excitement and determination.

The photo below the message showed an unkempt room in a Georgian house, complete with Adams-style fireplace, a fine plaster ceiling and a pair of large, closed double doors leading into another room.

There’s a jumble of different types of seating and a paper-strewn table with an Apple computer screen. Three seated people are engrossed in their laptops.

The message was posted April 23rd at 3.18pm. But it exists no longer – deleted for reasons unknown.

Deleted also, from the personal Facebook pages of Ryan Dellacrosse, founder and chief executive of Fuzati, and Ryan Scheel, its vice-president of marketing, are photos showing the Giant’s Causeway and the Hill of Slane, which the pair apparently visited during time off from their mission to Ireland.

Fuzati has offices in Dubai and Cleveland but is headquartered in Houston, Texas. Describing itself as “the premier Catholic marketing and technology firm”, Fuzati’s mission, ordained by Dellacrosse, is “to address the need of many Catholic organisations to utilise the best technology, marketing, and design to stimulate growth and open new opportunities”.

For a marketing firm, Fuzati has lately developed an uncharacteristic appetite for not trumpeting its work in Ireland.

Less than a week after the Fuzati war room post, digital journalist and entrepreneur Gavin Sheridan was lounging in his parents’ home in Midleton, Co Cork. He was tweeting and “poking around” on the internet, as he puts it.

On April 29th, Sheridan started to notice that more people were discussing seeing what are known as “pre-roll ads” from ProtectThe 8th – promotional videos that play before YouTube users can look at the video they want to view.

One of Sheridan’s 25,000 Twitter followers, around the same time, sent him a screen grab of an advertisement they saw on Facebook from an organisation styling itself “Undecided On The 8th”.

The ad spoke directly to viewers. “Yes or No? Unsure?” it asked. “Here are some unbiased facts to consider before you vote”.

The ad was created on April 24th – the day after the Fuzati team worked with anti-repeal activists in Dublin – and invited interested readers seeking “unbiased” information to follow a link to undecided8.org.

The information available via the website appeared anything but unbiased. To Sheridan’s reading, it was intended to nudge an undecided voter towards the No side.

“Lads,” thought Sheridan, “I’m on to something here”.

But the question was what? Using WHOIS lookup – which helps identify who might have registered a website – and by looking at the the source code on undecided8’s website, Sheridan arrived at CMG, the Catholic Mutual Group, a US-based insurance company whose board of trustees is comprised entirely of cardinals, bishops and archbishops.

CMG is a client of Fuzati, a connection made by Sheridan with the help of others on Twitter and further confirmed by Channel 4 reporter Paraic O’Brien. Neither Scheel nor Fuzati responded to contacts from The Irish Times.

As Sheridan found, several of the pre-roll ads on YouTube, created by the Standards in Public Office-registered group ProtectThe8th (known as Family and Life, the pro-life group run by David Manley), also contain links to undecided8.org.

Leaving aside the questionable ethics behind luring users of Facebook and YouTube into accessing a website purporting to give unbiased information, why would Fuzati (and whoever was paying them) want to do this?

According to Sheridan and other analysts of the online world, the stratagem is straight out of the playbook used by commercial advertising agencies and successfully by Cambridge Analytica, the now defunct UK political consultancy, that helped skew popular opinion in the US presidential election and the Brexit referendum.

By setting up a website named “undecided” and inviting people to link to it with the offer of helping them make up their minds, Fuzati was using what is known as dark advertising to create a self-selected group of voters, whom it is reasonable to assume have indeed not made up their minds.

The group of undecided voters are not connected to each other.

But crucially they are all now known to undecided8.org, whose operatives are in a position to “pool” the audience data they’ve collected from people clicking the link, and then re-target the self-identified undecided voters in an effort to sway them from undecided to No.

These types of techniques were employed by Cambridge Analytica and may have helped achieve victories in Wisconsin, Pennsylvania and Michigan – delivering the US presidency to Donald Trump through 77,744 swung votes out of 136 million ballots cast.

Analysts of the Irish referendum campaign agree that the outcome will depend on what currently undecided voters do on polling day.

It would be fanciful to suggest that an online journalist in Ireland caused two global social media giants – Facebook and Google – to make the policy moves they did this week, but Sheridan’s story, which he told on Twitter, attracted a lot of attention and underscored a problem at a time when the tech giants acknowledge they were thinking about the issue.

Google sources say the company was not lobbied by the Yes side ahead of its unprecedented ban on all referendum advertising announced on Wednesday. The decision was taken by the company’s “global policy team”, which included input from employees in Ireland who are in the company’s Europe, Middle East and Africa team, said the source.

The change had been under consideration “for a while”. Asked what this meant, the source said “more than days” but “since the Ireland referendum was called” (the referendum date was set on March 28th).

Earlier, on May 4th, Google announced changes to how it will assess political advertising in the US. Henceforth, advertisers will have to prove, by using government-issued identification, that they are an American citizen or a lawful permanent US resident .

Advertisements will also have to include a clear disclosure of who is paying, any links within the ad must go to the site the ad is referencing and “inappropriate or misleading” content will be policed.

How this will be achieved – one side’s misleading content is another side’s “truth” – is unclear. Google’s general counsel Kent Walker blogged that the May 4th changes were part of “our efforts to increase election advertising transparency, to improve online security for campaigns and candidates, and to help combat misinformation”.

The Google source said Ireland’s was the first referendum advertising ban and that further policy changes would be calibrated to individual countries.

“Watch this space,” said the source, “we are looking at elections ads globally”.

The main pro-repeal campaign, Together4Yes, says it did not lobby for what has happened, but that there were contacts.

“Once or twice a week, from time to time,” said a spokeswoman, “we notified them about advertisements that we asked them to have a look at against their own standards”.

But there was no request to stop taking ads and the contact was no different to asking any media outlet to look at a claimed inaccuracy.

There is no doubt, however, that the decision, particularly Google’s complete ban as opposed to Facebook’s ban just on foreign-funded advertising, causes a problem for the No campaign.

Save The 8th, the anti-abortion campaign fronted by John McGuirk, planned to spend at least €50,000 in the last fortnight before polling – all of it online and all targeted at undecided voters and highlighting what the campaign says is in the proposed post-repeal legislation, should the referendum pass.

On the top floor of the Gardiner Place office that is home to the Life Institute, a “pro-life” campaigning organisation, Save The 8th had just signed off on five new pre-roll ads for YouTube when the ban came through.

“A quick heads up,” Ciaran Conlon, director of strategy at MKC public relations engaged by Google to advise on public policy, said in a text to McGuirk, sent at 12.24pm – minutes before the ban was announced.

“Following our update around election integrity efforts globally, we have decided to pause all ads related to the Irish referendum on the Eighth Amendment. This will break shortly.”

McGuirk was furious. The ban cut the legs off a key element of the No side’s strategy between now and polling day.

One was of anti-repeal doctors saying the Eighth Amendment caused them no problems professionally. Another went behind the campaign’s claim that one in five pregnancies in the UK end in abortion. Another concentrated on the campaign’s 12-week ultrasound scan. A fourth concerned on Down Syndrome and the fifth was about a misdiagnosis of a fatal foetal abnormality.

The ads are hard-hitting and clear in their vote No message. One is introduced by a soothing voice. “She is safe and warm. She is happy and growing. But she is unwanted and about to die.”

Save The8th’s Niamh Uí Bhriain says: “The great thing about online advertising is that it is superfast.” It allows for speedy responses to issues as they arise and in a way unfiltered by media the No side distrusts.

McGuirk sees a big hurdle for the No side as a result of the ban. Save The 8th see a vast media bias ranged against the No side. This extends beyond their perception that The Irish Times, the Journal.ie and RTÉ are ranged against them to include joe.ie, her.ie, herfamily.ie, extra.ie and thegoss.ie

“They’re going to be pumping out stuff that is heavily repeal slanted and there is no regulation,” says McGuirk. “It’s going to be really difficult to get accurate information and personal stories out there.”

He has no doubt but that the Facebook and Google announcements are the result of lobbying by the Yes side. He says there was a meeting recently between Facebook executives and Together4Yes.

“It was basically an hour and a half of Together4Yes shouting at them to get the ads factchecked or take them down,” he claimed.

“Not true, not true,” says Amy Rose Harte, spokeswoman for Together4Yes. The meeting cited simply did not happen.

“There’s been no formal engagement with any of the tech giants.”